Beginning Monday, Aug. 3, the GoTriangle and GoDurham bus stop at the Streets at Southpoint mall will move from next to the movie theater to a new location on Renaissance Parkway.

JULY 30, 2020 -- Beginning Monday, Aug. 3, the GoTriangle and GoDurham bus stop at the Streets at Southpoint mall will move from next to the movie theater to a new location on Renaissance Parkway.

Designated park-and-ride spots will remain in the mall parking lot but will move closer to Renaissance Parkway. Find a map here. Please note that all of the buses running GoTriangle Routes 800 and 800S, even those heading eastbound, will serve the stops on the north side of Renaissance Parkway only. All stops on the south side will be eliminated. 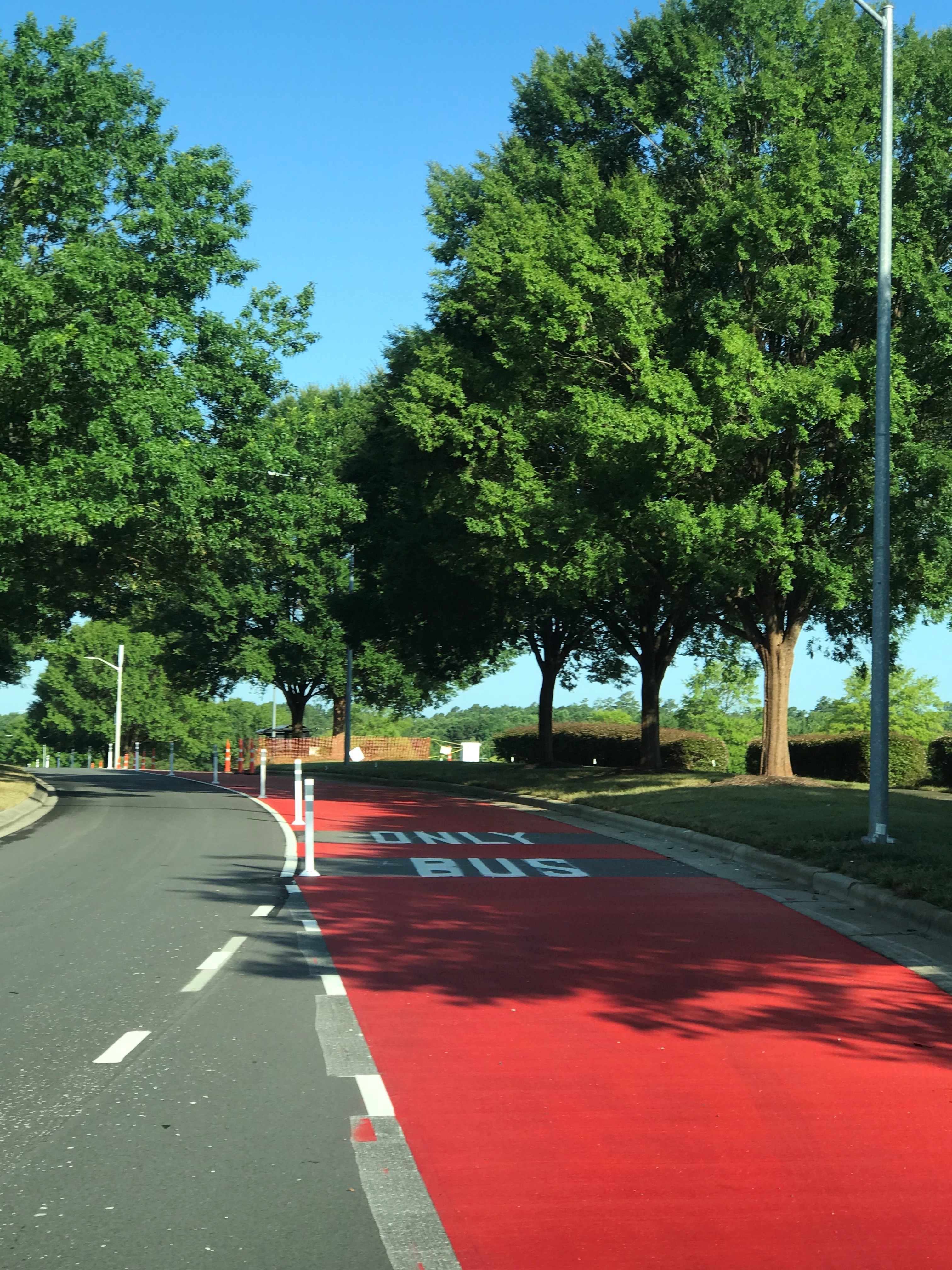 The Streets at Southpoint coordinated the move with the City of Durham and GoTriangle. In addition, the city has installed a bus lane on Renaissance Parkway to support safe and efficient operations at the stop, which GoDurham and GoTriangle buses will be rerouted to serve starting Aug. 3.

“The Streets at Southpoint is a key regional destination and a critical point in the local and regional transit network,” says Charles E. Lattuca, president and CEO of GoTriangle. “The park-and-ride lot at the mall also is used by numerous commuters traveling to jobs elsewhere in the region so we appreciate the continued partnership with Streets at Southpoint and the City of Durham.”

“The results of multiple experiments showed that red-colored pavement reduced the unauthorized use of transit lanes by private vehicles, reduced illegal parking in transit lanes and reduced the travel times of transit vehicles through the corridors,” the Federal Highway Administration said in a statement in January.

As the mall continues to update its offerings to better serve the Durham community, the relocation of the bus stop and the park-and-ride spaces provides a better experience for transit riders while enabling continued growth and development of the Streets at Southpoint.

“This is a great example of a public-private partnership improving service for transit riders while allowing the Streets at Southpoint to continue to grow,” says City of Durham Transportation Director Sean C. Egan.  “The bus stop relocation is part of a larger plan to improve GoDurham transit service in October, with 15-minute frequency on the entire Route 5 corridor connecting Southpoint with North Carolina Central University and Durham Station downtown.”

The Streets at Southpoint is a shopping and dining destination where visitors can discover more than 150 shops, dine at distinctive restaurants, enjoy a movie or relax in lifestyle areas.  Shoppers and diners there contribute sales tax revenue that supports critical transit improvements.

Bus stop additions and improvements are an important part of the transit plans in Durham, Wake and Orange counties. All of the counties have instituted a half-cent sales tax to pay invest in transit improvements across the region.

Last fall and winter, GoDurham invested about $785,000 in Durham County transit and federal grant matching funds in designing, building and adding amenities to 20 bus stops, and 50 more are in the pipeline for improvements now.

GoDurham, with GoTriangle’s help, recently completed an inventory of all GoDurham bus stops to assess their strengths and flaws, which will make it easier to identify stops that need help with the next round of investment.