He got on board! New home, new route, peace of mind

A free pass was just the nudge Andy Bechtel needed to try transit from his new home in downtown Durham to his job as an associate professor of journalism at the University of North Carolina at Chapel Hill.

Research Triangle Park, NC (May 17, 2019) –  A free pass was just the nudge Andy Bechtel needed to try transit from his new home in downtown Durham to his job as an associate professor of journalism at the University of North Carolina at Chapel Hill.

When he lived in Raleigh, Bechtel had made a habit of riding GoTriangle’s Chapel Hill to Raleigh express bus for well more than a decade, but since his move to Durham last summer, he hadn’t much explored his transit options.

When GoTriangle offered a free ride in honor of national Get on Board Day last month, he decided it was time to look at bus schedules and routes from his new home. A stop for GoTriangle Route 400 between Durham and Chapel Hill is a 10-minute walk from his apartment, he found. 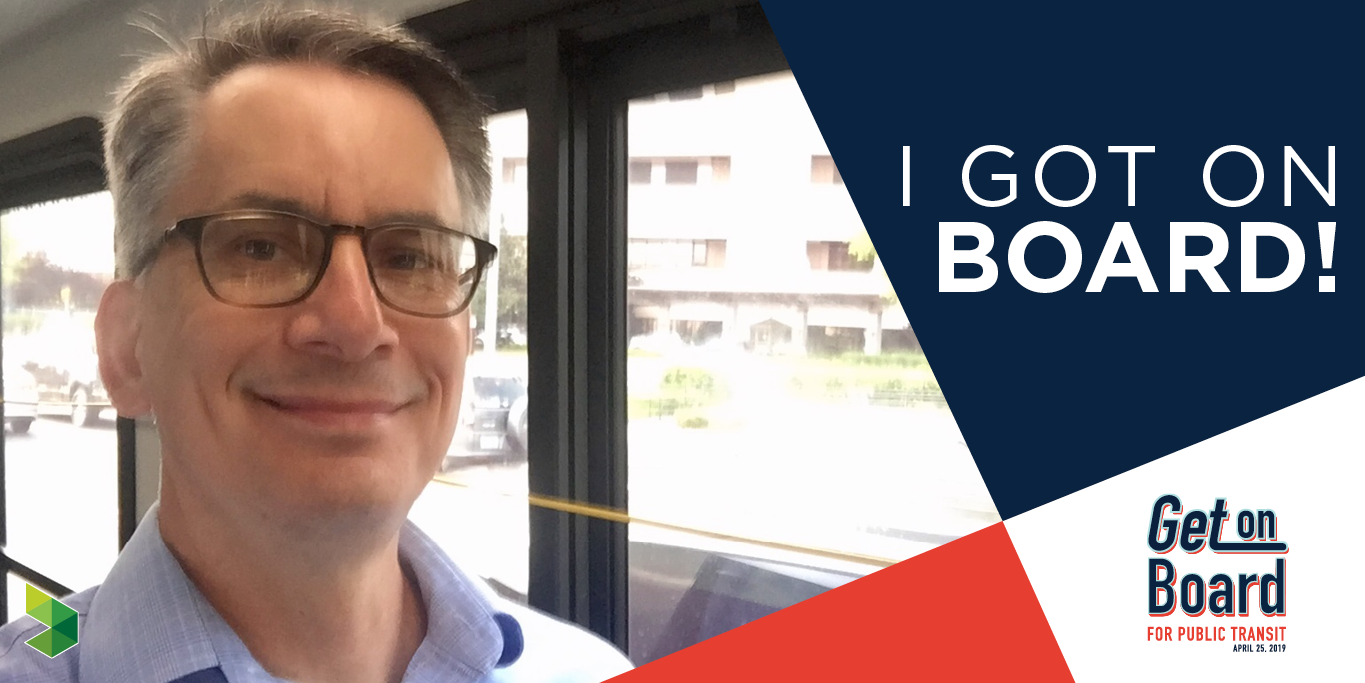 “That campaign was a nice reminder, making me think, ‘Sure, let me give this a try from my new location,’” Bechtel says. “It was easy to find where the bus was. It was easy to ride it. It was on time. It’s not an express route, so it does stop along the way, but it only added 5 to 10 minutes to my drive time, and that’s something I’m willing to do to save myself the aggravation of driving on 15-501 at 5 p.m.”

Bechtel says the Get on Board timing couldn’t have been better because he also had noticed that the price of gas was creeping up again.

“It’s not only the stress relief of being on the bus, I’m saving money on gasoline and wear and tear on my car, too,” he says.

The gas shortage after Hurricane Katrina in 2005 actually was the impetus for Bechtel’s first GoTriangle experience, and he liked it so much, he kept doing it more than 10 years.

“About half the time I took the bus from Raleigh to Chapel Hill, and I liked it because it was a break from my commute,” he says, explaining that he didn’t take the bus every day because he sometimes had to be on campus late into the evening. “I was in traffic, but I didn’t have to drive in it. I could be looking at my phone and not gripping the steering wheel on I-40.”

In summer 2008, Bechtel spent six weeks working on the Los Angeles Times’ website to get experience editing for what was then new digital media. He hated the idea of renting a car and trying to drive in such a big city, and he was thrilled when someone mentioned that the Santa Monica express bus traveled the route he needed.

“I didn’t drive for six weeks in LA because of all the buses, and my experience here gave me the confidence to do it there,” he says. “I thought, ‘I’m not going to be nervous,’ not, ‘Oh, I’m in a big city, I won’t know what to do.’ I was able to overcome all of that that, and it was a lot cheaper and safer to ride the bus. And I was able to do that because I had done it here.”

Bechtel hypothesizes that many people don’t take transit in the Triangle because they simply are afraid to try something new.

Bechtel is looking forward to getting into a transit routine again, at least a few days a week, now that he has found GoTriangle Route 400 to be so accessible and efficient.

“It was nice to be back on the bus, to be able to look at my phone, read a book for half an hour and not stare at the traffic,” he says. “It’s so nice to have that option, and now it will be one less car on the road on one of the busiest stretches in the Triangle.”

He’s convinced that more people would find that public transit exceeds their expectations if they would just try it.

“The best part for me is peace of mind, being on the bus, not having to worry about traffic and merging onto the Durham Freeway,” he says. “Especially after a long day of work, it’s nice to know the driving is going to be done by somebody else.”

Find out more about the ever-improving transit network in the Triangle at goforwardnc.com. Plan your route at gotriangle.org.