Durham and Wake counties have included the transformative project, which would run from West Durham through Raleigh to Garner or Clayton, in their long-range transit plans as the Triangle’s population is expected to increase by more than 600,000 residents over the next 20 years.

“GoTriangle’s communications, marketing and public engagement team members put together an amazing campaign to help community members engage with the latest information about the commuter rail line and to tell us what they are hoping to get from the project,” says Scott Thomas, chief communications officer at GoTriangle. “It is an honor to be recognized by leaders in the transit industry and we appreciate the support from our regional stakeholders in making this campaign a success.”

The campaign included a video of GoTriangle President and CEO Charles Lattuca explaining key project points and a print brochure in English and Spanish that was delivered to municipalities and community groups along the rail route, including transit centers and a local Community Health Center’s COVID-19 testing site. The campaign also included multiple posts on all of GoTriangle’s social media channels. 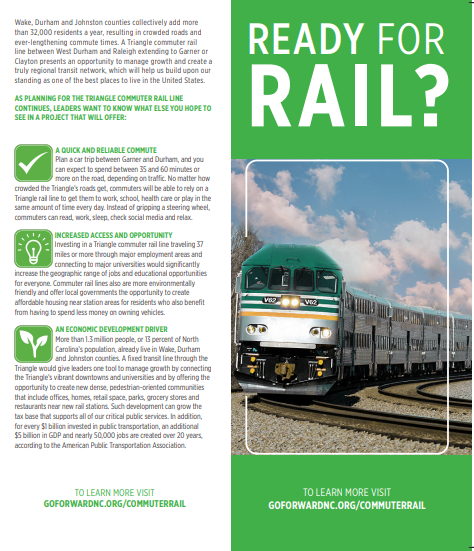 GoTriangle used the video, pamphlet and a targeted email and public engagement campaign as a gateway to a public survey, which garnered more than 5,000 responses from more than 2,700 Triangle residents.

The last study phase is expected to continue into 2022 and will lead to an initial project concept that includes station locations, new train tracks, bridges, changes to the roadway network, how often the trains would run and train storage and maintenance needs. Proposed stops include downtown Raleigh, North Carolina State University, Cary, Morrisville, Research Triangle Park and downtown Durham.

At the end of the study, governing bodies will vote on whether to proceed with the project and apply for entrance into the federal Capital Investments Grants pipeline.

“GoTriangle remains committed to providing quality information about our projects to the public,” Lattuca says. “The recognition by APTA helps to confirm we are meeting our goals in engaging a community that is eager to learn how commuter rail will provide a reliable commute, increase access to opportunity and help drive economic development in the Triangle.”

In its award application, GoTriangle explained: “The COVID-19 pandemic and all of its ramifications colored nearly every aspect of life over the year, reducing public transit ridership to essential workers and vulnerable neighbors without cars for many months. Coming up with a way to educate and remind people about a huge transit investment that remained in the study phase and to interest them enough to take a survey seemed a daunting challenge at a time when limited person-to-person contact and no large meetings could be part of the public engagement arsenal. Given the engagement and survey response numbers, this video, print, website and social media campaign surpassed all expectations.”

This summer, a second round of judging will review the top first place awards in each AdWheel category to select Grand Award winners.

Since the Ready for Rail campaign began, GoTriangle has launched a new website devoted entirely to the rail project at readyforrailnc.com.

On the site, anyone can sign up to become a Commuter Rail Insider and receive email alerts with news updates and engagement opportunities. There also is information on the history of the project , survey results, proposed station sites, answers to frequently asked questions and videos about other successful rail projects in the United States.