RESEARCH TRIANGLE PARK (APRIL 29, 2021) – Asked to offer feedback on plans for a Triangle commuter rail line, more than 2,700 community members responded with nearly 5,000 comments, an outpouring that underscored the high level of interest in the transformative project slated to run from West Durham through downtown Raleigh to Garner or Clayton.

Today, in response to the public’s clear desire to stay up to date on the project, GoTriangle is launching the new project website Ready for Rail NC at readyforrailnc.com. 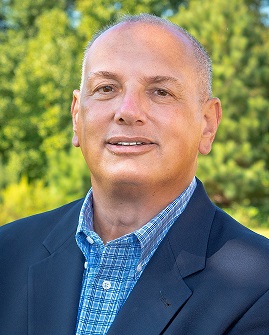 “On this comprehensive website, we have consolidated all of the information to date about this exciting project that Wake and Durham counties have included in their long-range transit plans,” says Charles E. Lattuca, president and CEO of GoTriangle, which is managing the commuter rail project. “Through the survey, we heard loud and clear that the community wants to know more about rail and to have access to updated project information. The Triangle is hungry to learn more about how this project will provide a reliable commute, increase access to opportunity and help drive economic development in the Triangle.”

On the site, anyone can sign up to become a Commuter Rail Insider and receive email alerts with news updates and engagement opportunities. There also is information on the history of the project , survey results, proposed station sites, answers to frequently asked questions and videos about other successful rail projects in the United States.

“We are in a study phase for the project, and planners will be using community feedback to help refine the initial project concept,” Lattuca says. “We’ll house all this information on the website, so sign up as a Commuter Rail Insider and you’ll be notified when updated information is published.”

Project stakeholders include residents, transit riders, the business community, local governments, universities and other institutions and major employers along the rail line as well as the North Carolina Railroad Company, North Carolina Department of Transportation Rail Division and operating railroads including Norfolk Southern and CSX.

Planners also are analyzing the economic and land-use benefits commuter rail would bring to the Triangle and the state.

During the comment period last fall, community members had the opportunity to answer these questions about the project:

GoTriangle, which worked with a consultant to record and organize the thousands of comments, determined some major takeaways. Community members expect the project to decrease commute times, benefit the environment, bring the Triangle up to modern metropolitan standards and foster a sense of connectivity throughout the region. The major concern cited was cost, previously projected to be $1.4 billion to $1.8 billion.

More information about the survey results can be found on the new website here.

An earlier study found that a 37-mile route running 40 times a day between Garner and West Durham would be most likely to qualify for federal funding, which can pay up to half of the project’s cost. 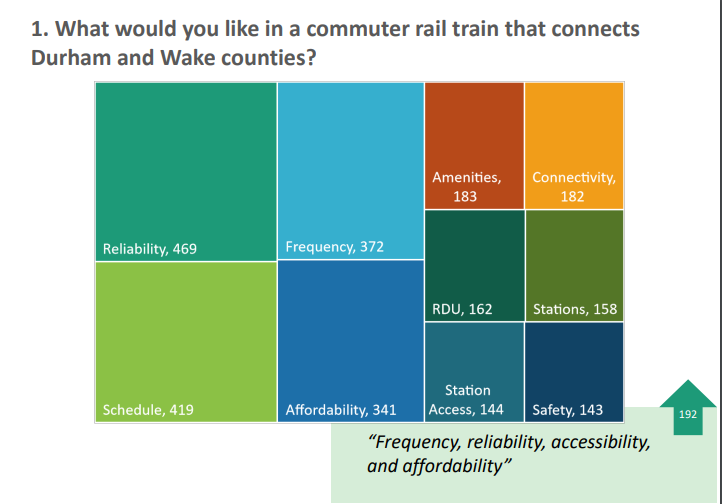 The public’s answers to what people want to see in a commuter rail train included:

For the question about what a commuter rail train might do for the community, the answers included:

At the end of the current study phase, local elected officials, including the boards of commissioners for Wake and Durham counties, will decide whether to seek federal funds and begin final design and construction.

For what those decision-makers should be considering, survey answers included:

“Our wonderful region continues to attract more residents and more businesses, making our commuter rail project more important by the day,” says Lattuca, left. “A Triangle commuter rail line between West Durham and Raleigh extending to Garner or Clayton presents an opportunity to manage growth and create a truly regional transit network, which will help us build upon our standing as one of the best places to live and do business in the United States.”

Lattuca pointed to the announcement this week that Apple plans to spend $552 million to establish a campus in Research Triangle Park with 3,000 high-paying jobs.

“The more attractive we are, the more we are going to need transit solutions to maintain our quality of life,” Lattuca says. “Global companies like Amazon, Google and Apple have corporate goals about shrinking their carbon footprints as well, and building environmentally friendly mass transportation like commuter rail to connect the Triangle is going to be imperative to maintaining our appeal.” 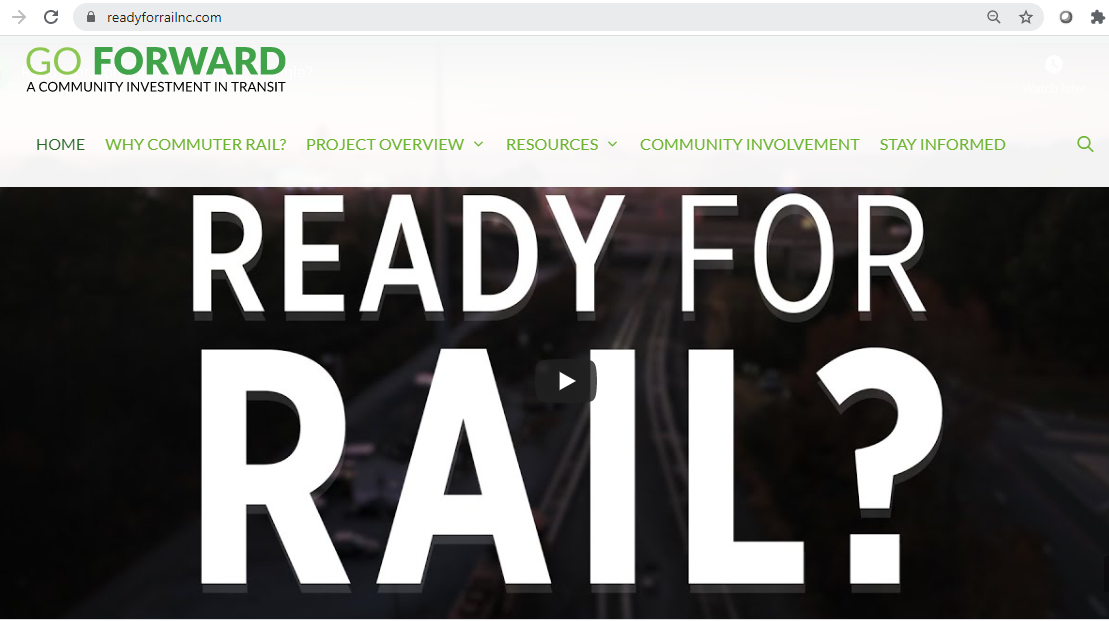