OCT. 2, 2020 -- A package of service improvements and adjustments that GoTriangle plans to implement Oct. 11 includes new service for Holly Springs and Morrisville and a temporary change in how the agency serves Raleigh-Durham International Airport as the COVID-19 pandemic continues to result in fewer travelers. 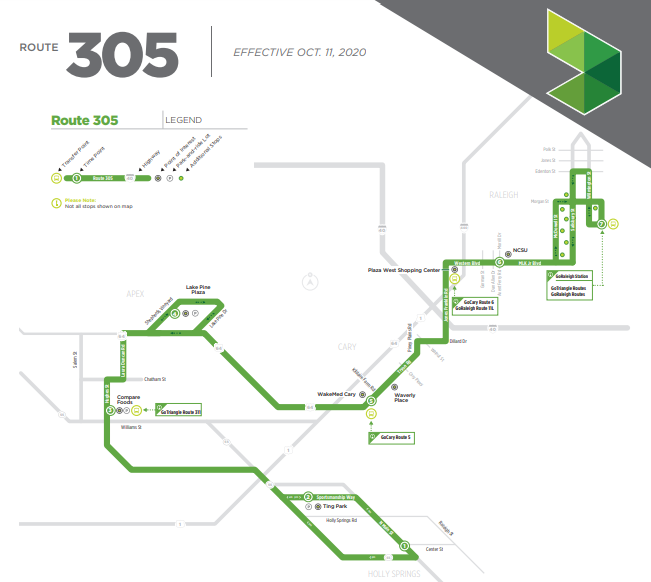 Extending GoTriangle Route 305 to Holly Springs and other service improvements approved in the spring originally were planned to begin in August but were postponed until October, also because of the pandemic.

The new Holly Springs service is the last piece in connecting all Wake County communities to transit, which was one of the four main goals of the Wake Transit plan when voters approved it in 2016. The other goals are to connect the region, provide frequent and reliable urban mobility and enhance access to transit.

Other GoTriangle transit improvements set to begin Oct. 11 include extending Route 310 to Cary Depot to serve more destinations in Morrisville and Cary with peak-hour service every 30 minutes on weekdays. The service will run hourly midday and evenings between Cary and the Regional Transit Center, where other connections can be made.

This change means GoTriangle Route 300 between Cary Depot and GoRaleigh Station in downtown Raleigh will be shortened because the service from Cary Depot to the Regional Transit Center will be provided on Route 310.

Please find new maps and schedules for all of the new service here.

Also beginning Oct. 11, GoTriangle customers riding to and from Raleigh-Durham International Airport during the day Monday through Saturday will be served by a new shuttle service running every 30 minutes between the Regional Transit Center and RDU.

GoTriangle Route 100, which currently serves RDU, now will stop at the airport only after 6:30 p.m. Monday through Saturday and all day on Sundays and holidays. During the day, Route 100 will travel between GoRaleigh Station and the Regional Transit Center, where air travelers can catch the new RDU Shuttle to the airport. GoTriangle Route 105, which travels the same path as Route 100 except with no airport stop, will go into hiatus while the shuttle runs.

GoTriangle customers traveling from the Western Triangle to the RTC also will use the shuttle between the Regional Transit Center and RDU.

“Looking at the continuing low numbers of people traveling to the airport during the pandemic, we needed to explore ways to serve our customers while also making better use of the taxpayer money we spend providing this vital connection to the airport,” says GoTriangle President and CEO Charles E. Lattuca. “Temporarily serving RDU with a shuttle from the Regional Transit Center emerged as the best solution. One bonus is that the trip on Route 100 between Raleigh and the RTC will be 10 minutes shorter.”

Please find new maps and schedules for the Route 100 and RDU Shuttle here.

The new service on Route 305 between downtown Holly Springs and downtown Raleigh will be available during peak hours and includes a new park-and-ride lot at Ting Park on Sportsmanship Way in Holly Springs. Route 305 also will be extended to serve more stops in Apex, including the Compare Foods Park-and-Ride and Apex Peakway near Walmart and Cambridge Village senior housing.

“On behalf of the over 40,000 residents of Holly Springs, we are very excited and looking forward to our start-up with bus service from Holly Springs to Raleigh and an optional stop in Apex starting on Oct. 11,” says Holly Springs Mayor Dick Sears. “Our sincere appreciation to GoTriangle and GoCary for their support and assistance in this most important project. We saved the best for last!”

The Wake Tech park-and-ride facility is the result of a partnership among Wake County, Wake Tech, Wake Transit, GoTriangle, GoRaleigh, the city of Raleigh and Fuquay-Varina.

Because GoTriangle Routes 311 and NRX serve primarily commuters into Research Triangle Park, whose businesses overwhelmingly have employees working from home because of the COVID pandemic, those routes will remain dormant for now.

Find out more about GoTriangle at gotriangle.org.