Commuter rail in the Triangle

Transit plans in Wake and Durham counties include a commuter rail project that would run 37 miles along the North Carolina Railroad Corridor between Garner and West Durham, stopping at downtown Raleigh, N.C. State, Cary, Morrisville and Research Triangle Park along the way. Both counties as well as Orange County have passed half-cent sales taxes to invest in transit improvements.

An exploratory study of the 37-mile corridor was completed in May 2019. That study showed: 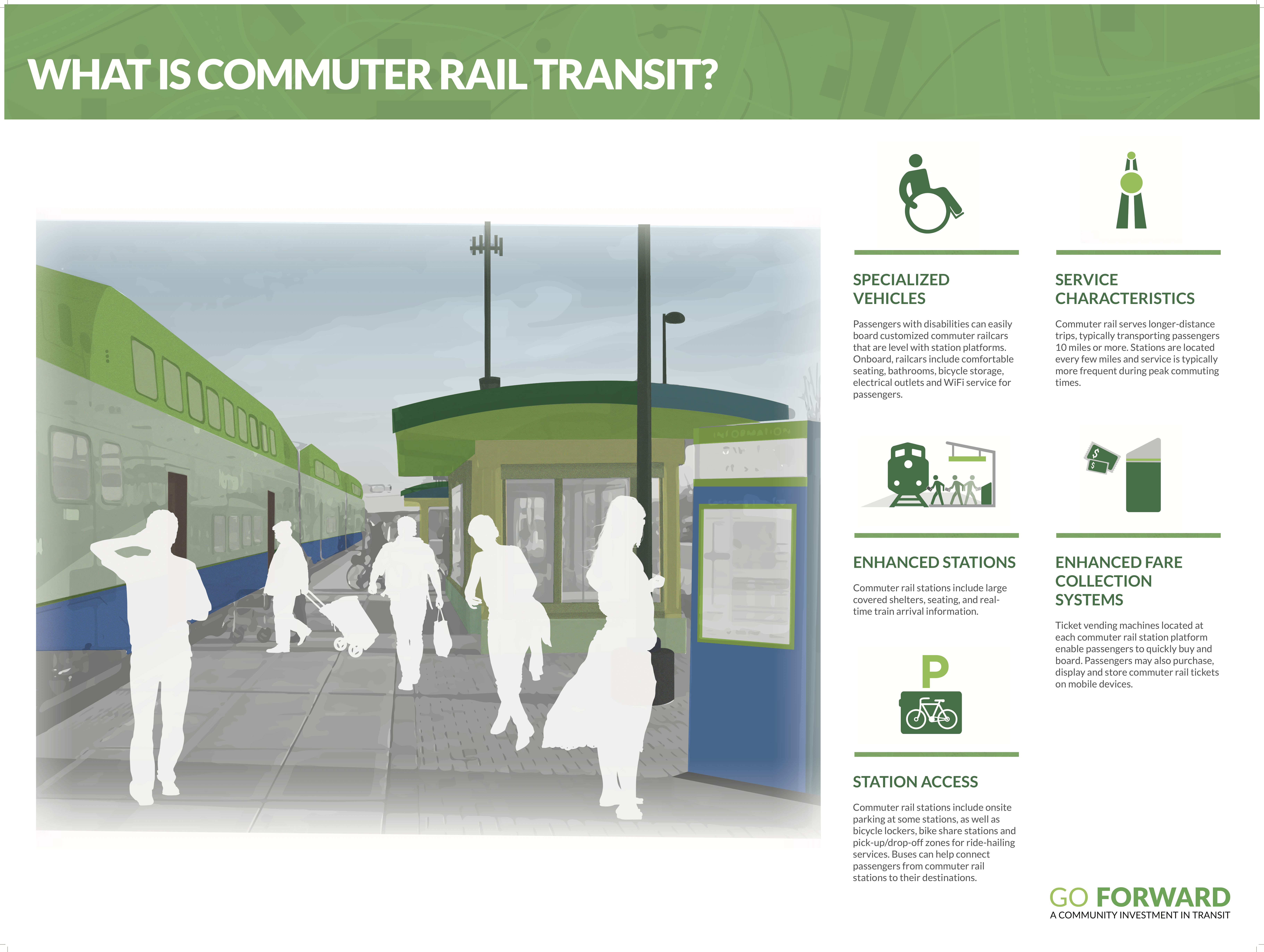 A second study, called the Greater Triangle Commuter Rail Study, was initiated in 2019 to analyze the need for infrastructure, such as additional train tracks, to support the potential commuter rail service in the corridor and to develop ridership projections and cost estimates, which are key criteria in assessing the project’s potential eligibility for federal funding.

A number of regional partners and the North Carolina Railroad asked whether the project could be expanded so the second study also evaluated the feasibility of adding Johnston County/Selma and Orange County/Mebane to the commuter rail line.

Based on federal transit planning criteria, the study showed that of the six initial scenarios, a route running 40 times a day between Garner and West Durham would be most likely to qualify for federal funding through the Federal Transit Administration’s New Starts grant program. Those criteria include ridership, access and cost.

Scenarios evaluating routes between Hillsborough and Clayton and Durham and Clayton were studied as well, and those results became available Jan. 8, 2020.

The updated study shows that a route between Durham and Clayton in Johnston County with 40 weekday trips also likely would meet the federal criteria. Johnston County would decide whether to create a designated transit funding source to help pay for extending the project from Garner in Wake County into Clayton.

The studies also indicated that any viable commuter rail project running in the existing NC Railroad corridor would require the construction of at least 34 miles of new parallel track depending on the number of new daily trains. Future analyses, in coordination with the North Carolina Railroad Company and the operating railroads in the corridor, would further refine capital requirements for adding tracks, bridges and other infrastructure.

To qualify for federal funding in the New Starts program, a transit project is evaluated based on local financial commitment, mobility improvements, environmental benefits, congestion relief, cost effectiveness, potential for economic development and existing land use, and an overall rating of medium is needed to receive a federal grant. Federal funds can pay for up to half of the total transit project cost and must be matched by other funds.

A look at preliminary numbers

By comparison, stretching the route from Mebane to Selma with the same number of trips would cost approximately $2.5 billion to $3.2 billion to build and $57 million a year to operate and maintain while carrying 8,000 to 11,500 daily passengers.

It is important to note that all estimates from the initial studies are preliminary and likely will change after additional study and any early engineering work.

A team of key stakeholders including representatives from North Carolina Railroad Company, NCDOT, the Research Triangle Foundation, four counties and two metropolitan planning organizations in the corridor has been meeting regularly to review and discuss study findings and opportunities for the commuter rail project.

Now that studies have shown that there are at least two routes that could qualify for federal funding, GoTriangle has been presenting the findings to boards of elected officials, who will decide whether to continue the work needed to go forward.

The next phase of study would include:

During this additional phase of study, project management partners including the counties would develop and sign agreements with one another, the railroads, municipalities, metropolitan planning organizations and other key stakeholders.

These agreements would focus on cost-sharing; on concept details such as how many tracks are needed, where stations might go and where park-and-rides and a maintenance facility might be located; and on working out details with authorities that have jurisdiction over portions of the project on how the parties intend to work with each other going forward.

The commuter rail project will incorporate significant community engagement and public input as it moves forward into any additional stages.

Send questions or comments to: info@goforwardnc.org