For Bike to School Day, it’s off to Northwoods Elementary School we go.

Sitting on his red “Cars” bike, Nadir Dkhir is eager to get going on his ride to Northwoods Elementary School in Cary, mashing on the bike’s button that makes speeding car noises four or five times. The first-grader is proud that this is his second time participating in the national Bike to School Day.

“I did it in kindergarten, too,” he says as more than 40 parents and schoolchildren prepare to bike a greenway from Godbold Park to the school about a mile away. “It’s fun for me because of how all the people come out and do it together.”

May is national Bike Month, and Bike to School Day is one of the many events focused on helping people understand the benefits of biking. For GoTriangle, biking is an important part of its GoTogether campaign that focuses on all the ways people can get to work or school other than alone in a vehicle. GoTriangle offers information and resources, including biking tips and maps and guides to help potential riders plan safe routes, at http://gotriangle.org/bike.

“In the same way GoTriangle helps employers identify commuting plans and matches people with ride-share options, helping people learn about the benefits of cycling and pointing them toward resources to help them safely bike to school or work is part of our overall mission,” says Shelly Parker, manager of sustainable transportation at GoTriangle. “Cycling is completely removed from the traffic congestion equation and doesn’t impact the air quality negatively. It has a positive net benefit compared with making that trip in a vehicle. The more people who bike, the better.” 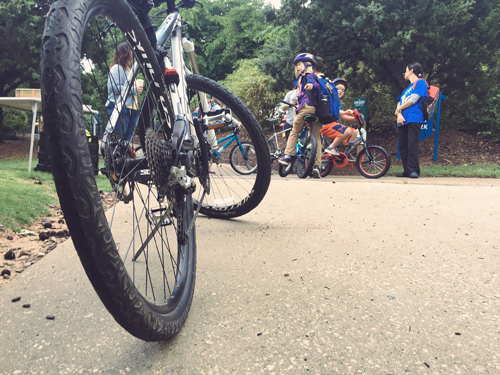 “It’s a good opportunity to reach out to the local community, it’s fun for the kids and it’s a good way to highlight issues in the community of infrastructure and safety that people might not have considered before because they always drive their kids to school,” says Greg Couch, a Northwoods PTA member and a Bike to School Day coordinator. “The best part of Bike to School Day is it’s a good opportunity for parents to ride with their children and do something they aren’t used to doing if they’re always in their cars.”

Two years ago, Northwoods became one of five Wake County public schools participating in a Safe Routes to School project in conjunction with the University of North Carolina Highway Safety Research Center. The center gave grants to the schools and charged them with coming up with ways to give children better opportunities to safely walk and bike to school. The other schools are Bugg Magnet Elementary School and Ligon Magnet Middle School in Raleigh, Hodge Road Elementary School in Knightdale and Lincoln Heights Elementary School in Fuquay-Varina. Their work will serve as a blueprint for other Wake County schools to create their own safe walking and biking programs.

“Safe Routes to School and the UNC Highway Safety Research Center have given our grant schools the opportunity to create safer environments for walking and biking to school,” says Brian Glendenning, WCPSS senior administrator for healthful living. “The five selected schools have used the funding to educate students, make changes to facilities and create community partnerships to encourage sustained support for active initiatives.”

At Northwoods, Bike to School Day also included an afterschool bike rodeo that the PTA and the Cary Police Department orchestrated.

“We are using some of our grant money this year to purchase cones, portable stop signs, things that will allow us to not only expand what we are able to do with our afternoon bike rodeo this year but also allow us to put on our own bike or pedestrian safety events in the future,” Couch says. “We’ve begun to notice that continued reinforcement has begun to trickle down to parents. This year, I’ve twice observed students showing their own parents the proper way to use the crosswalks near the school!”

At the ride, Northwoods parent Steve Goodridge, a certified cycling instructor, uses a bullhorn to stress the rules before the crowd gets on its way.

“Your first job when sharing a path like this is not to crash into someone else,” he says. “Is there traffic on this path? Yes, we are traffic. Do squirrels look both ways when they cross a path? No. Do you look both ways? Don’t ride like a squirrel.”

“I really like it because it gets people hyped up and ready for school,” she says. “And they get exercise, and you get to go fast on your bike.”

Christine Kushner, vice chair of the Wake County Board of Education, attended the ride at Northwoods to show her support for finding ways to help more schoolchildren walk and bike to school.

“This is a pretty impressive turnout given the rain,” she says. “This is a great initiative to get kids active and outside. Statistics show the number of kids biking to school is way down. If we can enhance that, it’s a great thing.”

It was Northwoods parent Leigh Williams who launched the first Bike to School Day activities at the school.

“I love the community aspect of it, that the whole school gets excited about it, that families do it together, that it gets people out on our Cary greenways,” she says. “Then there’s the safety aspect of it. We teach them not to ride a bike but to drive it. You’re in charge.

“After this event every year, we see more and more kids on bikes,” she says. “I love it.”

For a full calendar of Bike Month events, visit gotriangle.org/bikemonth2017. Bike to Work Day is May 19. In Durham, GoTriangle will be offering food, fun and prizes at five pit stops for riders that day. Through its Share the Ride NC program, GoTriangle helps connect people who want to find other bicyclists to ride to work with. Find a video on how to sign up at bit.ly/gotrianglebiking

To learn how to begin a Safe Route to School Program, visit the NCDOT’s website at bit.ly/ncdotbiking.