Canes mural ready for community close-ups! Now, meet the painter who got his art start on the bus

Canes Country is the most recent beneficiary of Kernick’s self-taught talents, which were put to use this month turning the wall of a building that GoTriangle owns into a tribute to the Carolina Hurricanes’ post-season run to the Eastern Conference Finals. 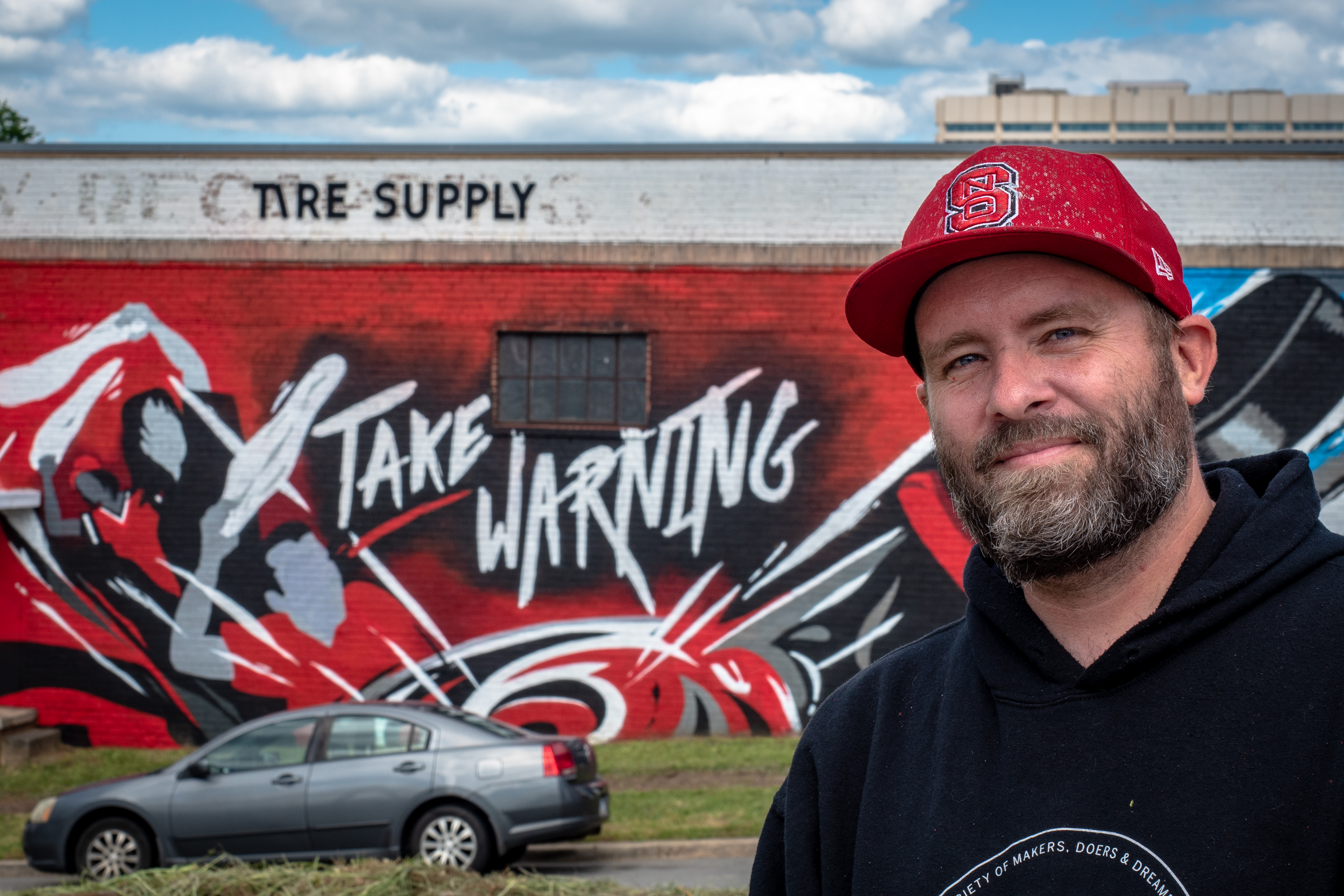 Raleigh artist Sean Kernick is quick to draw the conclusion that he might not have had an art career at all if it weren’t for the time he spent filling up sketchbooks on his daily trips on public transportation to and from school in Philadelphia.

From sixth through 12th grades, Kernick spent a total of 90 minutes each day riding, chatting, laughing and sketching along the streets of Philly, where he also picked up some spray-painting skills providing some admittedly, um, unsanctioned art with his teenaged friends.

“Time on public transportation, it’s like when you get lost in thought driving but without the responsibility of driving,” he says. “Imagine the kind of ideas you can think through and work out in your head by just taking the time to have somebody else take you from place to place. That’s where 80 percent of my sketchbook got filled up at was on the bus.”

Canes Country is the most recent beneficiary of Kernick’s self-taught talents, which were put to use this month turning the wall of a building that GoTriangle owns into a tribute to the Carolina Hurricanes’ post-season run to the Eastern Conference Finals.

“We’re honored to work with the Raleigh Murals Project and truly appreciate GoTriangle’s support in our efforts to expand the Carolina Hurricanes’ footprint in the region,” says Dan LaTorraca, director of digital marketing for the Carolina Hurricanes. “The organization is proud to showcase the creativity of local artists and leave our mark on the city that has shown us tremendous support.”

Find the mural at the corner of Harrington and Lane streets in downtown Raleigh, celebrate the Canes and snap some pictures. A gallery of downloadable photos is available here.

“We could not be more excited about this joint partnership with the Hurricanes and the Raleigh Murals Project,” says Mike Charbonneau, GoTriangle’s chief communications officer. “Now that the mural is finished, we hope the community will come by the property to enjoy it, take selfies, celebrate, whatever makes them feel like they’re a part of the energy that this Canes team and its post-season success have poured into our community.”

The Raleigh Murals Project connected Kernick, the Canes and GoTriangle, with the team providing the money for the artist and GoTriangle donating the building as the canvas.

“Not until this moment, I hadn’t remembered so deeply my love with the bus, and having the connection between the buses and this wall here, it really adds another layer to make this project super special,” Kernick says. “I still know what bus number I took. I took the 27 bus to and from school, and the connection that it created with me and other people in my community still stands to this day.”

Kernick began the Canes mural on the night of May 8, projecting his design onto the wall and then sketching it out with black spray paint. After days of intermittent rain, he finished the project Tuesday just in time for the Canes’ first home game in the finals, having gone up and down his two ladders with paint in his hands hundreds of times.

“It’s an extremely physical job,” says Kernick, who spent much of his career working as a corporate graphic designer. “Your legs and the arches of your feet just aren’t used to it, and it’s not always a stable surface you’re on.”

From corporate to community art

Kernick quit his corporate job about three years ago to start an online magazine, quickly realizing that he had made a mistake and watching his bills pile up. He dug around his toolbox and settled on pulling out his spray-painting skills, a “high-value service” he hoped to put to use as the city was taking off.

“The population of Raleigh is huge, and there were only a few of us doing murals,” says Kernick, who has completed about 40 murals, with the majority of them being created in the past eight months. “I have the opposite problem now where it’s hard to keep up.”

Kernick got involved in the Canes project when Jedidiah Gant, a cofounder of the Raleigh Murals Project, let artists know that the hockey team was interested in sponsoring a mural in a high-profile area to help expand the team’s reach into the community that supports it so wildly.

“I’ve been a fan for years and was interested in trying to work on a mural with them,” Kernick says. “I’ve been trying to kind of position myself so when I saw a post from Jedidiah online looking for a wall for the Hurricanes, I jumped all over that. I was like, ‘Me!!!!’ ”

Turning around the Canes mural as quickly as possible meant that Kernick had to bring out the big guns for the first time ever. In addition to the 80 to 100 cans of spray paint he used, he also bought a spray gun to cover more space more quickly this time.

While Kernick was painting, numerous people drove by the site and honked and yelled while pedestrians stopped and watched for a bit and snapped pictures. 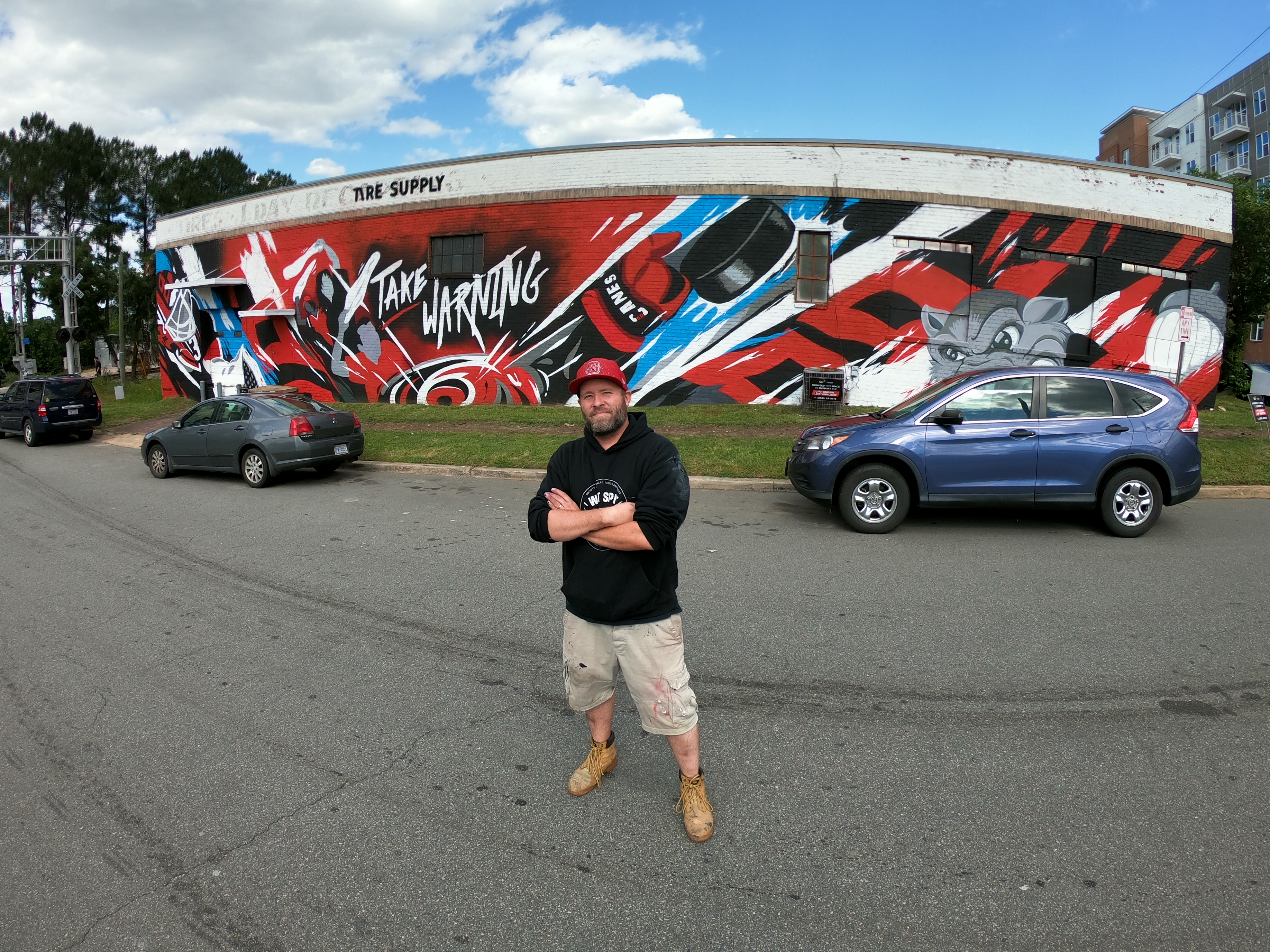 “It makes me feel fantastic,” says Kernick, who notes that his kind of art form is as much performance as it is technical. “You’re out in the elements, you’re among people and the community, so when you’re painting something like this downtown, it represents something to so many different people that it really takes on a life of its own, not just the piece, but the creation of the piece.”

Participating in public art, he says, connects people to the piece more deeply than if they were just viewing it.

“When people drive by and see it and they get excited and take a picture, suddenly they become part of the creation as well,” Kernick says.  “That means something to people. They’re hollering at me, and I’m shouting it back to them, now they’re part of that section of the wall as well. So everybody’s included.”

A larger than life design

“So the design ended up being larger than life, bold, colorful, strong, with a flair of finesse,” he says. “The smooth lines and the hard angles and bold colors tell the story of the team this year and the team in general, but really this team is unique.”

“The perseverance they have mixed with this family vibe,” Kernick says. “As soon as you start doing the celebration, as soon as you start getting labeled a bunch of jerks, all of those things kind of bring a family together, closer, and when a team starts having these tertiary kind of elements come into play, it really is this magic ingredient.”

And Kernick has taken a special place in that family by turning that magic into a mural with the skills he honed sketching on a public bus.

“Engagement with public transportation isn’t about getting from Point A to Point B, it’s about connecting to your community in a far more intimate way,” he says. “Not just with people, but seeing the streets around you, getting to talk to people, seeing the artwork, the murals, it’s a much better way to get around. It’s not just about efficiency, it’s about connection.”