The increasing popularity of GoTriangle’s long-distance express routes is just one reason the regional transit agency is trying out a higher-capacity transit coach over the next month.

The increasing popularity of GoTriangle’s long-distance express routes is just one reason the regional transit agency is trying out a higher-capacity transit coach over the next month. The 45-foot MCI coach bus can comfortably carry 54 riders, nearly 20 more than a regular 40-foot bus, potentially cutting down on the number of buses that will be needed to transport an expanding Triangle population up and down Interstate 40.

“If you look at our longer runs between Durham and Raleigh and Chapel Hill and Raleigh, in some cases people are standing today, which can be uncomfortable for that distance,” says Pat Stephens, GoTriangle’s director of transit operations. “If we have a bus that allows more people to have a seat on I-40, it might encourage more people to get out of their cars and try the bus on some of our most congested corridors.”

With the Triangle growing by 80 residents a day, GoTriangle is always seeking ways to make transit a more accessible choice and a larger gateway to opportunities as our roads become even more crowded, Stephens says. Between 2006 and 2016, for example, the average number of cars traveling Wade Avenue each day between I-40 and Edwards Mill Road doubled from 49,000 to 98,000. Wade Avenue is a major connection between Raleigh and Chapel Hill and Durham.

The test runs are just a first step in exploring whether higher-capacity buses, which also feature bigger and fully padded seats, would be better for GoTriangle customers, more cost-effective for taxpayers and more efficient for the agency’s fleet.

The test coach uses diesel fuel, but Motor Coach Industries plans eventually to offer buses that use electricity and compressed natural gas as well. GoTriangle plans to create a team to weigh the efficiencies of using buses with different types of alternative fuels.

“The key question is whether the use of higher-capacity coaches on our routes is something that brings about value for our customers as well as whether it could save us money in the long term,” Stephens says. “We have a network of traditional buses now, but as we start to move toward the region’s first rail projects, using higher-capacity buses is one step in that next direction for transit in the Triangle.”

The MCI coach, which also provides easier boarding for those using wheelchairs, costs between $600,000 and $650,000, depending on the amount of technological equipment ordered, and should remain in service from 14 to 16 years. A typical 40-foot bus costs about $470,000 and typically lasts about 12 years.

That’s just one variable in assessing whether higher-capacity buses are a good fit for GoTriangle, Stephens says. As transit ridership increases in the ever-burgeoning Triangle, using buses with more seats also would mean fewer buses on congested roads at peak hours, a decreased need for more bus operators and lower maintenance costs.

“This bus is designed to be used on longer distance routes where you have less frequent stopping,” Stephens says. “Also it’s the nature of some of the local type routes to have the smaller streets with narrower turns, which makes these buses unsafe in some areas.”

MCI is a U.S. company with headquarters in Des Plaines, Illinois, and plants in Winnipeg, Manitoba, Canada, and Pembina, North Dakota. 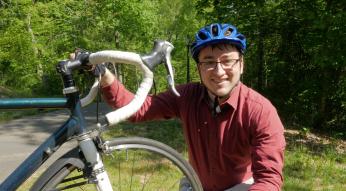