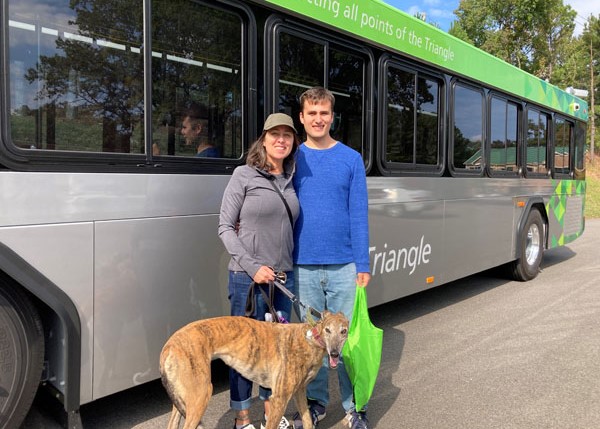 A warm fall day, the company of friends and a bus ride to dine out made for a fun time for teens and young adults from 3 Bluebirds Farm on an outing with GoTriangle staff designed introduce them to riding a public bus.

Cade Baldwin, one of the teens who took the trip on Oct. 8, said he enjoyed it because he learned how he could get to the mall by himself as well as places farther afield. Gaining independence and confidence in social settings are among the skills that 3 Bluebirds Farm works to foster in its clients, who are children, teens and young adults with autism.

“Now, he can go to places that are further away,” said Cade’s mother, Jennifer Baldwin, who arrived with the family dog, Lulu, to pick Cade up from a Raleigh shopping center, where the special bus trip started and ended. (See above photo)

Erin O’Loughlin, who founded 3 Bluebirds Farm with her husband, Colm, to help their own son who has autism live independently, said being able to travel solo is key for many people with autism.

“We are always, constantly, looking for ways to help our teens and adults live as independently as they can,” O’Loughlin said. “Many of them cannot drive, so that takes away a lot of their independence –when you can’t drive or go somewhere on your own or if you’re dependent on somebody. The idea of teaching them how to use a city bus is imperative to some of their independent skills. So, this was an exciting day for us.”

Besides learning how to use the bus system, the outing also built on their social skills as they practiced ordering food at a restaurant at a mall, eating out together and returning by bus. O’Loughlin said she also learned about GoTriangle’s paratransit service, ACCESS, for which her clients can apply.

“Using this bus system to their advantage is wonderful,” O’Loughlin said.

“I didn’t really know about the GoTriangle bus before this,” she said. “I started looking it up before the trip. And I was like, ‘Maybe this is something Cade can do independently,’ because he does like to go to several places, like Crossroads, and maybe the mall. He really values his independence, so this could really be something that helps him get that autonomy. And we are so grateful to 3 Bluebirds for this organization.” 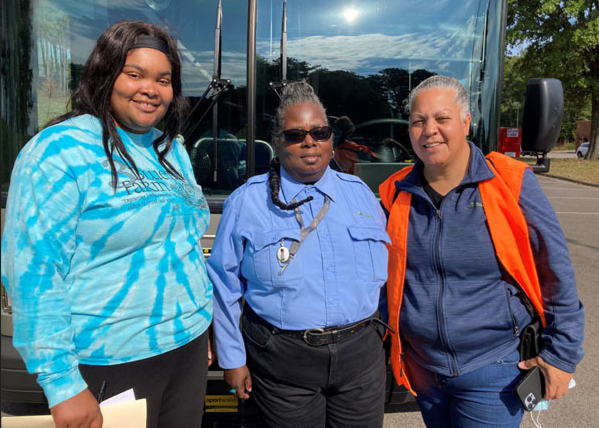 Rose Williams, the GoTriangle Transit Operator who drove the bus, said she found the trip to be fun and interesting. A bus driver since she was in the 11th grade, she said she likes transporting people. She said she explained the rules of riding the bus, including the importance of remaining seated while the bus was in motion, and the riders listened and complied.

GoTriangle’s paratransit supervisor Jackie Stewart attended the event to ensure that everything went smoothly. She said the trip was rewarding to her because she could see how excited the participants were to be inside a 40-foot bus for the first time.

“It’s nice to be able to give to the community and to be a part of taking them to the mall,” Stewart said.

Like any trip, there were unexpected moments. One of the riders became anxious at one point when the bus was going at highway speed. One of the 3 Bluebirds Farm team members quickly alerted Stewart of the situation. Stewart then told Williams to slow down slightly.

“As she reduced her speed, he calmed down, and he was able to adjust,” Stewart said.

Another unexpected moment came when one of the outing participants, a young man, made a sketch of Elvis while riding the bus and presented it to another rider. This sketch drew excitement and joy from even the adults not only because it was a beautiful drawing, but also because it was a thoughtful gesture.

“We’re working on social skills and making friends, and he [the sketcher] knows that she loves Elvis, so he just drew that for her and handed it to her,” O’Loughlin said.

The outing had been planned for months and came about with the help of GoTriangle’s Operations Manager Brian Andrews, who worked for months to make a bus available just for the outing and to communicate the details with 3 Bluebirds Farm management.

Andrews said he was elated to have the pleasure of working with 3 BlueBirds Farm to coordinate the event.

“As public servants, it’s our duty to serve the communities and citizens of the Triangle,” he said. “GoTriangle’s purpose and vision is to educate and improve the lives of people through the use of safe, reliable, and easy to use travel choices. The glowing smiles on the faces of the children and parents in the photos is proof enough that GoTriangle is accomplishing that mission.” – Written by Odile Fredericks, Internal Communications Specialist

Erin O’Loughlin and her son are pictured below 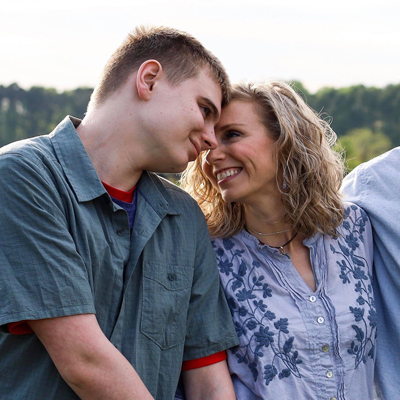