This proposal includes the construction of a tunnel to bring a portion of the light-rail line through downtown Durham underground, keeping Blackwell street open and eliminating interaction between the railroads, car traffic and the light rail at street crossings in the corridor.

Research Triangle Park, NC (Dec. 14, 2018) – GoTriangle submitted a new proposal for Durham and Orange counties’ light rail project through downtown Durham to the Federal Transit Administration for their evaluation. This proposal includes the construction of a tunnel to bring a portion of the light-rail line through downtown Durham underground, keeping Blackwell street open and eliminating interaction between the railroads, car traffic and the light rail at street crossings in the corridor.

Project team members presented the tunnel option to a group of downtown Durham stakeholders Thursday. A new solution became necessary when Norfolk Southern expressed concerns regarding railroad operations and after stakeholders expressed concern over closing a section of Blackwell Street to vehicles.

“We gathered fifty downtown stakeholders together on Thursday, and there was strong support in the group for the tunnel taking the light rail under Blackwell and Mangum Streets. We’ll be incurring significant costs with this solution, but it will allow us to get the light rail built, and that’s crucial for our region over the next 100 years,” says Durham Mayor Steve Schewel.

The proposed tunnel would still include a light-rail station near DPAC, while minimizing potential impacts to the historic Old Bull building and allowing continued access for vehicles, bicycles and pedestrians across Blackwell Street.

“This appears to be an excellent solution that not only maintains the existing street network in the area but minimizes the impact on the appearance of the Old Bull building at a design pinch point,” says Durham County Commissioner and GoTriangle Board Chair Ellen Reckhow.

“I am excited that we have all come together - community stakeholders and GoTriangle staff- with a solution that addresses the needs for a vibrant downtown and ensures that we are moving  forward with the successful implementation of the transformational Durham Orange Light Rail Project,” says Durham County Commissioner Chair Wendy Jacobs.

With consensus from downtown stakeholders, GoTriangle will now work with its partners to meet the environmental and railroad requirements necessary to confirm the tunnel is a viable option and to identify additional funding for this project change.

“The light-rail project comes with many complex issues to carefully consider, and we appreciate urgent and earnest efforts by City, County and transit leaders to work through these in collaboration with concerned stakeholders,” said Michael Goodmon, vice president of real estate, Capitol Broadcasting Company (which owns the American Tobacco Campus).

The community, Durham leaders and downtown business owners will play an active role in helping shape the design of a new solution. 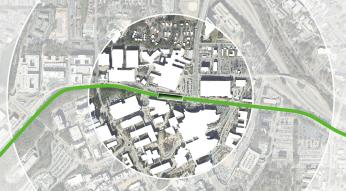 How guiding growth around light-rail stations can generate $1.4 billion in new tax revenue, thousands of jobs