Rider Story: "We go together because it's priceless father-son time."

As Father's Day approaches, Ben August was kind enough to take some time and talk to us about why he and his son, Jacob, #GoTogether

JUNE 16, 2016 / SAMANTHA ALLEN Ben AugustBen August commutes to work everyday by bike with his son. From his house in Carrboro where he lives with his wife and three children, Ben and his 6-year-old son Jacob start their journey every morning together. First stop, kindergarten! Once Jacob locks his bike and heads to class, Ben jumps back on his bike to continue to work in Chapel Hill. Ben started bike commuting 16 years ago when he lived in California. Initially as a way to save on gas and wear-and-tear, cycling grew into a money saver and great form of exercise. An easy bike commute became a factor when Ben’s family decided to move to the Triangle. Once in the Triangle, Ben got rid of one of the family cars, and started an everyday bike commute. He says, “The benefits of cycling are myriad. The price of a bike doesn’t compare to gas, insurance, state taxes, and parking.” Biking to work is also great for fitness, getting outdoors, and brain power, not to mention, great from the environment! Ben recommends, “If you want to do it, you should try it and see where it takes you.” And don’t forget, when you try that new commute, go together! 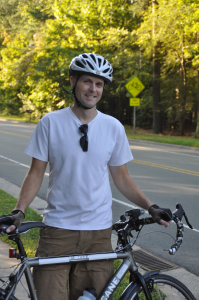