She got on board! First transit trip turns Cary commuter into forever fan

“I rode the bus on Tuesday, and on Wednesday I marched myself down to the state parking office and got my GoPass. I liked it so much I convinced my husband to ride the bus with me on Thursday.”

Seeing a GoTriangle tweet offering a free bus pass to honor national Get on Board Day last month, Diane Dulaney realized she was out of excuses not to try transit.

When Dulaney’s two boys were younger, carpool duties kept her chained to her car, but with one son in college and one in high school now, she was ready to break free.

The free pass was the key.

“It took one time,” says Dulaney, a Cary resident who works as a project manager for the state Department of Public Instruction in downtown Raleigh. “I rode the bus on Tuesday, and on Wednesday I marched myself down to the state parking office and got my GoPass. I liked it so much I convinced my husband to ride the bus with me on Thursday.” 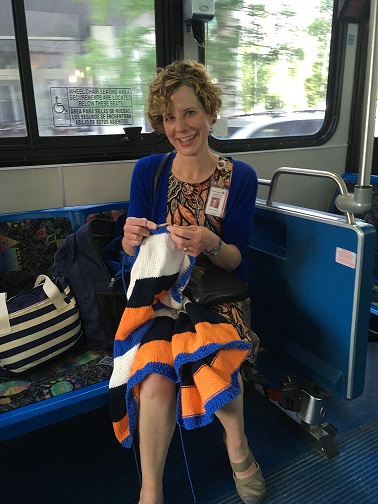 Dulaney, who has used public transit in larger cities such as New York and Boston, says she had some slight trepidation about her first bus trip in Wake County.

“The bus drivers are great,” she says. “They were very patient with me. The first day I bumbled through it. I couldn’t figure out how to swipe my card. I pulled my cord too early. The bus driver said, ‘Do you really want to get off here?’ He was super nice.”

Dulaney’s husband works on the NC State University campus, so he also has access to an employer-sponsored GoPass, which allows people to ride free on any transit agency in the Triangle. Dulaney says having both of them tuned in to transit will help the family this summer when her college son is home and needs a car.

“I’m not buying him a car for the summer so I was going to have to carpool with my husband,” she says. “Taking the bus is going to be much better than carpooling because we just have such different schedules.

From her home in east Cary, Dulaney is able to walk about 5 minutes to a bus stop that serves GoTriangle Route 301, which travels Western Boulevard and drops her off right at her office door on Wilmington Street in Raleigh. Her morning bus commute takes roughly the same amount of time as driving, although the evening bus commute can be a bit longer.

“But I really love the time I get back,” Dulaney says. “I can read on the bus. I can knit. I love to knit. I’m making this ridiculously large afghan for my son. The last one took me a year. I’m thinking if I take the bus more, I can finish this one in six months.”

Dulaney’s ultimate goal, now that one week of GoTriangle service has made her a transit lover and advocate, is to get rid of a car completely.

“If a family truly saves $10,000 a year by going down to one car, that’s a great trip you can take every year,” she says. “A great trip! And if you don’t drive, you’re so much more likely to ride a bike or walk. I don’t like to sit in a car. I’d rather be moving. And I really do feel guilty from an environmental standpoint driving my car alone to work every day.”

Dulaney is anticipating that as the Triangle keeps growing by 80 people a day, transit is going to be more than a money saver for her. It will also be a moneymaker.

“Selfishly, the fact that my house is so close to the bus line will make my house even more valuable,” says Dulaney, who lives in what she describes as an old part of Cary that made it an affordable place to buy a home 14 years ago. “Probably in 10 years, people will really start looking for that. So I want the transit system to be stronger and better, and the way for that to happen is for people to start riding the bus.”