Together, Triangle transit agencies seek federal grant that would get electric buses on the road

Research Triangle Park, NC (June 28, 2017) – Seven electric buses could be quietly and efficiently tooling around the Triangle by early 2019 if the federal government approves a grant application that GoTriangle, GoRaleigh, GoCary and Chapel Hill Transit jointly submitted this week.

The grant, combined with local transit money, would allow GoRaleigh, GoTriangle and Chapel Hill Transit to buy two buses each and GoCary one bus so that transit planners can begin the move to lower-emission and more efficient transit vehicles.

Many residents asked whether agencies were considering buying electric buses to cut down on the need for fossil fuels as transit plans in Wake, Durham and Orange counties were finalized over the past year.

“We have listened to those who took the time to comment on transit plans and are thrilled to work together as one region to seek the means to deploy electric buses in both local and regional service,” says Jeff Mann, GoTriangle general manager. “We want to make sure we’re using the best tools in the toolshed to connect the people and places of our growing region.”

The federal Low or No Emission Competitive Grant Program provides money so state and local governmental authorities can buy or lease zero-emission and low-emission transit buses. The money also can go toward acquiring, building or leasing supporting facilities. Under the FAST Act, $55 million per year is available until fiscal year 2020.

Duke Energy wrote a letter of support with the application and will work with project partners to provide guidance and support if the grant is awarded.

“Battery electric bus acquisition and operation very much align with Cary’s Strategic Energy Action Plan as well as our Comprehensive Community Plan long-term goals,” says Cary Town Manager Sean Stegall. “We support the regional approach as a proud partner-transit operating entity and look forward to implementing these new vehicles in a way that will serve our local community as well as the region together.”

“We have already started to invest local funds to lease an electric bus and charging infrastructure (FY18 budget) and believe by partnering further with GoTriangle, GoRaleigh and GoCary on this regional application, if funded, we would greatly accelerate the process for conversion to electric-powered buses in our service area and the region,” the town of Chapel Hill, the town of Carrboro and UNC-Chapel Hill say in a letter supporting the grant application. “The North Carolina Triangle region offers a strong network of transit services, and the region’s transit providers work together to maximize service efficiency and reliability. Funding through this program will benefit several systems in the Triangle region and will allow the region to reduce greenhouse gases.”

The agencies plan to buy the buses from Proterra, whose East Coast manufacturing is based in South Carolina. The company touts that 75 percent of the bus components it uses are made in 34 states.

Proterra’s 40-foot electric bus costs about $980,000, including charging stations and other needed equipment. That’s about twice the cost of a diesel bus, but electric buses produce no tailpipe emissions and are less expensive to operate, traveling 21.4 mpg-equivalent at 19 cents a mile. By comparison, a diesel bus gets 3.86 mpg at 84 cents per mile.

That efficiency means the operating cost over the lifespan of an electric bus is $250,000 to $400,000 less than a diesel bus. (Watch the Proterra bus video here.)

If the agencies are awarded the federal grant, which would cover 50 percent of the $6.8 million total cost of the project, Proterra will provide a $175,000 in-kind donation.

The Federal Transit Administration is expected to announce grant winners in September. If the Triangle area agencies are successful, Proterra estimates it could deliver the first bus by December 2018.

“With the current and projected rate of growth in the Triangle, the area’s public transit system will become more and more important to maintaining a high and sustainable quality of life for Triangle residents and visitors,” says Rick Sapienza, director of clean transportation at the NC Clean Energy Technology Center, in a letter of support. “The fact that several organizations have partnered in this effort shows vision and commitment. This type of public-private collaboration and coordination is essential in developing an effective and efficient transportation system.” 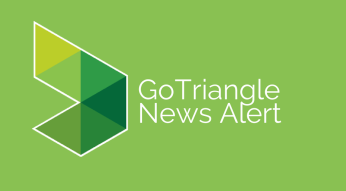 What can Durham County residents expect from transit investments? Here’s a handy list 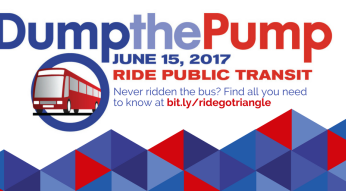 Thanks to Triangle transit investments, it’s even easier to Dump the Pump this year