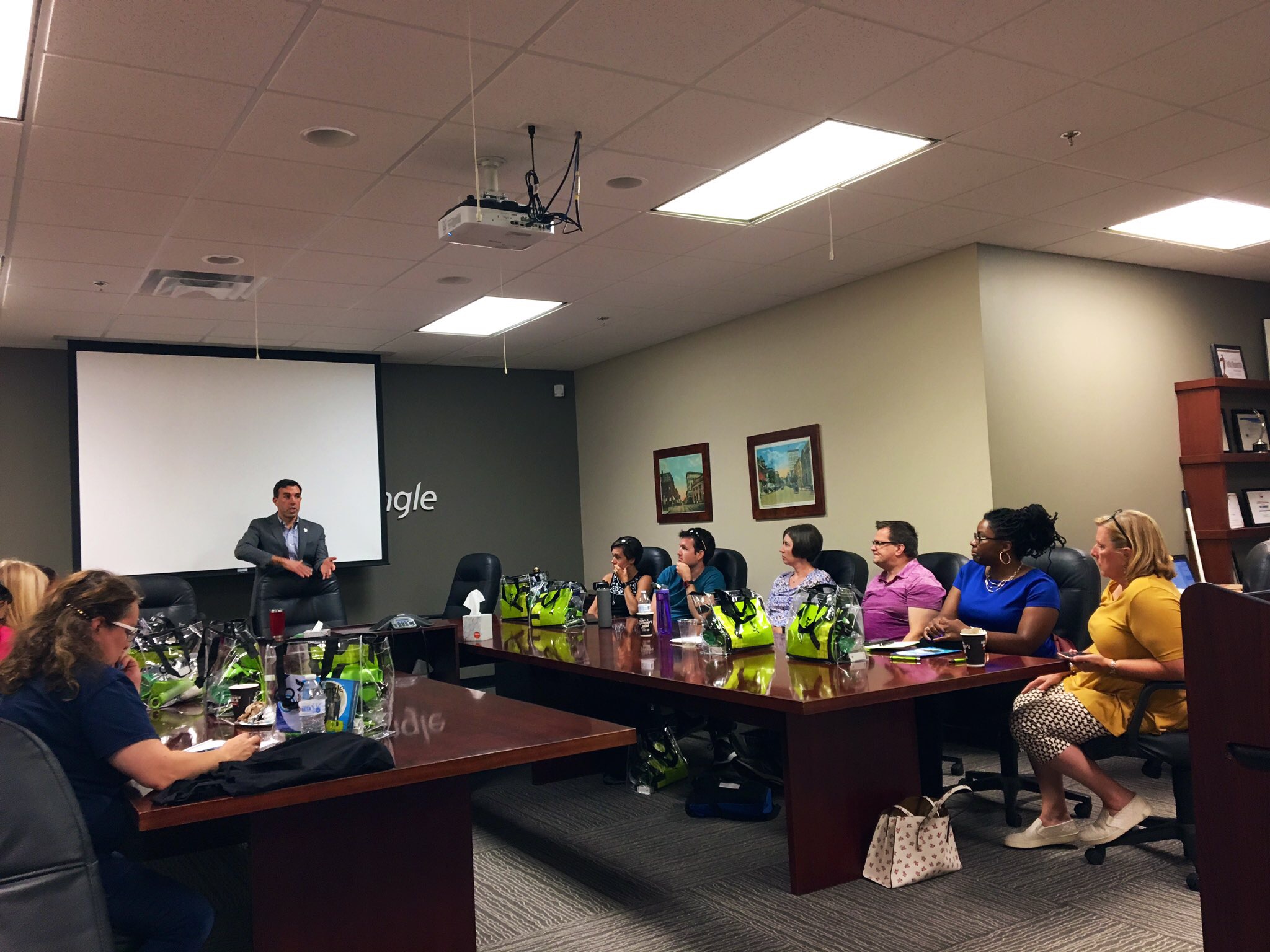 If 10 teachers leave Durham at 11:45 a.m. and travel on a GoTriangle Route 100 bus to see the transit stops at Raleigh-Durham International Airport before riding at 65 mph on I-40 to downtown Raleigh, how long does it take them to come up with 23 new lesson plans involving transit?

OK, so the Wake County public school teachers who spent a day with GoTriangle staff members as part of WakeEd Partnership’s SummerSTEM program may never use the experience to write word problems for math tests, but they left excited about creating other real-life lessons in comparative and data analysis, politics, government, economics, mapping, conservation, budgets and more.

“We always think huge on global problems and their impact,” said Emily Hardee, STEM coordinator at Brentwood Elementary School in Raleigh. “But for many of our students, it’s all about what’s right outside their houses a lot of the time.”

Hardee was the coach for the contingent of teachers visiting GoTriangle last week as part of the SummerSTEM collaboration among WakeEd Partnership, the Wake County Public School System and STEM businesses and organizations. About 100 WCPSS educators visit businesses each summer to get hands-on experiences in STEM fields so that they can take real-world lessons back to the classroom.

At GoTriangle, the day’s goal was two-fold: to immerse the teachers in all things transit to spark some creative lesson planning and to impart enough practical knowledge that they could help their school families navigate the transit network. Extra credit: getting a feel for what it’s like to be dependent on transit as some of their students and families are.

Using iPads and the trip-planning tool on the GoTriangle website, the teachers set about trying to plan their daily routines without driving their cars.

“If you didn’t have access to a car, how would you get around for a week?” asked Mike Charbonneau, GoTriangle’s chief communications officer. “How do you get families without cars involved in school activities? When they get to upper grades, kids want to be involved in sports and clubs, so how do you continue to provide those opportunities? It’s a huge challenge especially with as much as our county is growing.”

Teachers from Zebulon tried to plan trips to Garner and those from Raleigh looked for ways to get to Cary. Though some routes are impractical now, the Wake Transit Plan approved by voters in 2016 uses a half-cent sales tax to pay for more buses going to more places more often each year. Coming online this fiscal year, among other improvements, is a North Raleigh Express, a Rolesville Express and new all-day routes between Knightdale and Raleigh and Raleigh and Garner.

“This planning tool was so easy to use,” said Erica Flory, a media specialist at Zebulon Elementary School in Eastern Wake County. “I like how it breaks down that it takes this much time to walk and you’re given several options. You’re not stuck with just one option. For me to drive to work is 11 minutes, though, but if there were public transportation, I’d definitely take it because I’m very supportive of it.”

The online planning tool got an A-plus on ease of use from all of the teachers, especially because it tells riders how to get where they need to go on any of the Triangle’s transit agencies: GoTriangle, GoRaleigh, GoDurham, GoCary, Chapel Hill Transit and Orange Public Transportation.

“A child would find that interface very easy to use,” said Sheila Boone, a teacher at Rolesville Elementary School. “They’ll find it so easy. And I think it’s awesome that it’s free for them to ride the bus.”

That fact was one of many relayed during a transit overview that Charbonneau provided before the trip-planning exercise. All children ages 18 and under can ride all buses in the Triangle free. Those 12 and under ride free with an adult, and those 13 to 18 ride free with a Youth GoPass, which they can get at transit centers or public libraries. Find out more here. 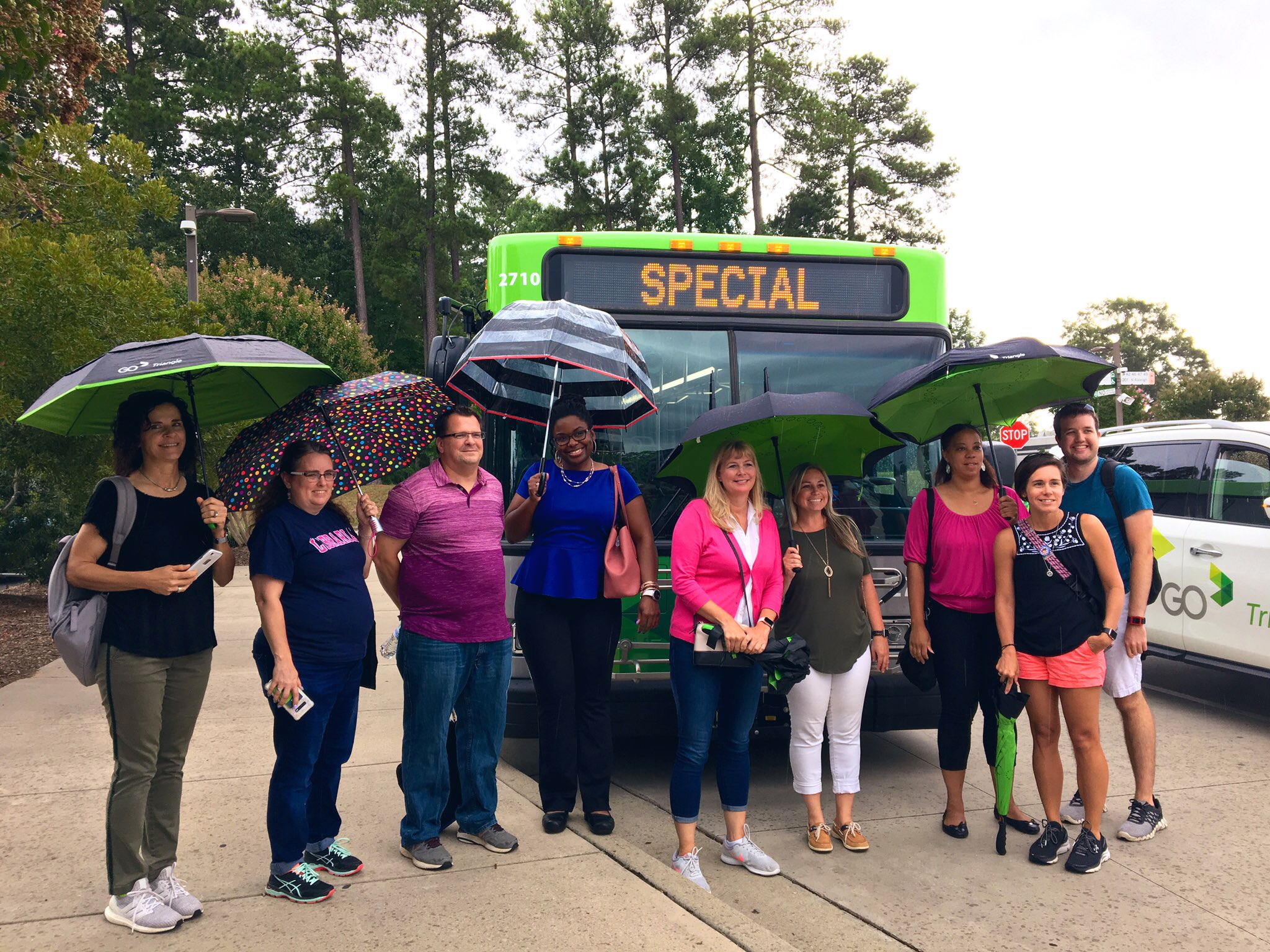 Sean Hogan, a teacher at Weatherstone Elementary School in Cary, was surprised to find how transit-friendly his life could be.

“I live in Cary, and I just saw I’m right within the Maynard loop for GoCary,” he said. “I know exactly where that stop is. Within Cary, taking transit would be very reasonable.”

Because Weatherstone also is on the Maynard loop, Hogan began envisioning taking schoolchildren on the GoCary route and teaching them about using transit.

Tonya Long, a senior WCPSS administrator for Business, Finance and Information Technology Education and Marketing and Entrepreneurship Education, ticked off many potential lessons for her students.

One, let students use GoTriangle data to figure out where the next routes should be. Two, use known business openings to decide where buses should go next. Three, have marketing students devise outreach plans for new service. Four, use a monthly spreadsheet with GoTriangle data to figure out what went well or what needs improvement. Five, from a personal finance standpoint, have students plan a day trip with the most economical route. With a budget of $10 for a family of six, where can you go and what can you do in Raleigh? Six, have multimedia and webpage design students use the transit data to develop an app or user-friendly webpages.

“Our teachers are going to regret I was here today,” Long said with a laugh.

To Teresa Pierrie, program director at Wake Ed Partnership, Long’s connections between what the teachers were learning and what they could teach were thrilling.

“We’re always looking for that authentic project,” Pierrie said. “This would be a real-life solution we’re providing for the community.”

The transit immersion day for the teachers also included a tour of Raleigh Union Station. To get there from GoTriangle’s office in Durham, the group traveled by bus on GoTriangle Route 100, which serves Raleigh-Durham International Airport on its way to N.C. State University and downtown Raleigh.

Conservation, economics and civics, too 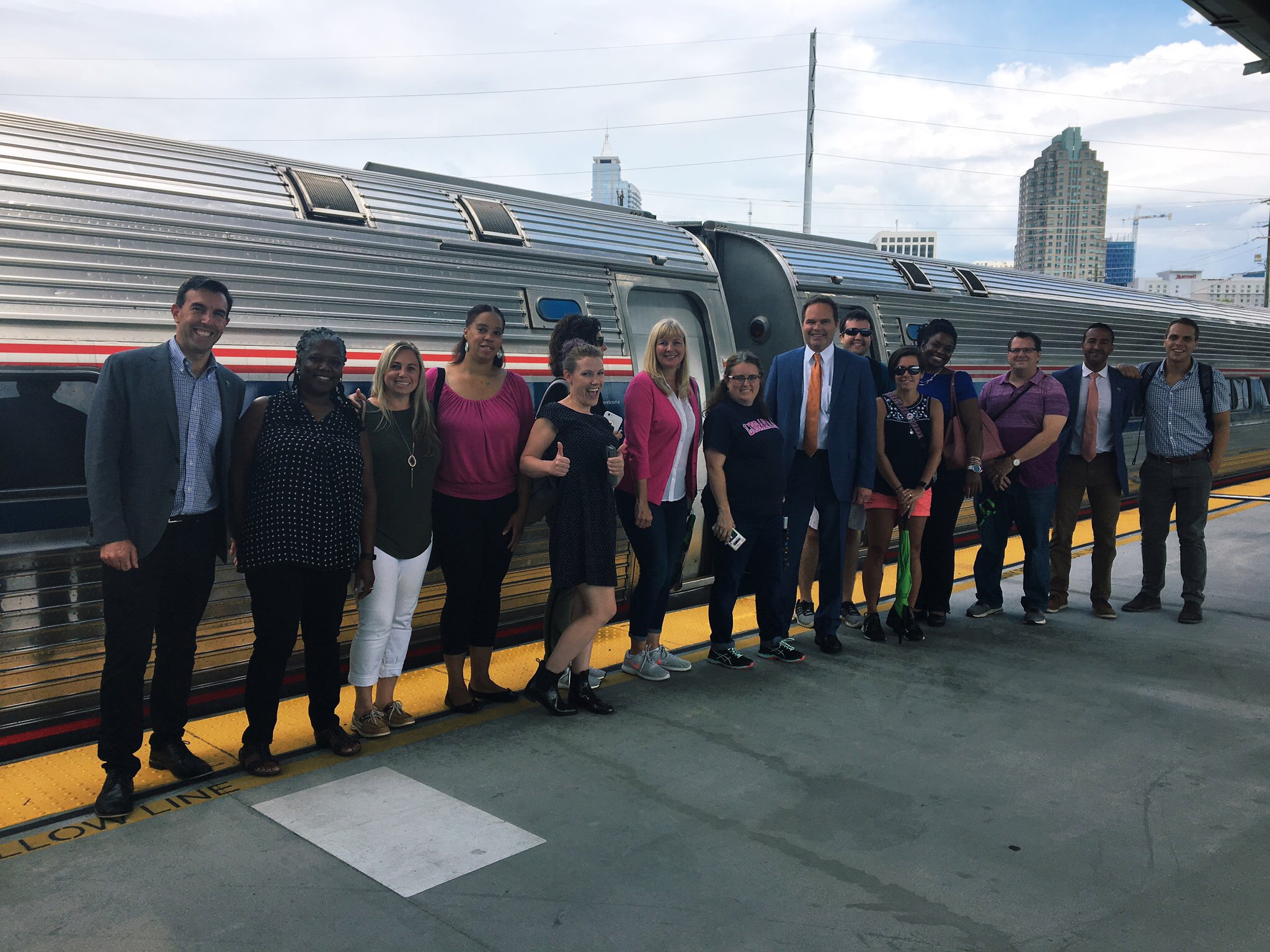 Raleigh Union Station opened last year and is operated by Amtrak. It currently is served by 10 trains per day including the Piedmont, which runs from Raleigh to Charlotte with stops in Cary and Durham, among others. The station also will serve the planned commuter rail line between Garner through Raleigh to Durham that is included in both the Wake Transit Plan and the Durham County Transit Plan.

During the tour, Jeff Mann, CEO and president of GoTriangle, explained all of the features of the station that were recycled from the site’s previous life as a steel plant for Dillon Supply. He also pointed out the nearby GoTriangle-owned property where a bus facility that coordinates with the train station will be built, and he stressed the amount of cooperation and planning and financial resources required to plan a transit network with multiple modes among multiple jurisdictions.

“I loved learning about using an old building and repurposing it,” said Tim Chartrand, a teacher at Zebulon Elementary School. “I like that they used some of the old building inside. They still have the crane. You can just tell they didn’t want to get rid of the history of it, but they modernized it. And they were very strategic about it.”

“We do a whole unit on conservation for the fourth quarter in fourth grade,” Hertzig said. “This building would tie in very nicely with that.”

“And,” Chartrand said, “we do an economics unit, too, so we could go into the taxes, federal money, state money that went into building it, and how it all ties into government. We do government and economics and never really put it together. So this is a good example of that.”

“Plus,” Boone said, “it shows how you have to stagger growth and how you can only build one thing at a time and how long-term planning for the city at large is so difficult. This can be a perfect example to explain real world to kids.”

They all agreed that everything they learned during the day would be perfect for teaching the important four Cs to their students: collaboration, critical thinking, communications and creativity.

“If you can make learning parallel to a real-world dynamic like this, you produce students who become educated,” Boone said. “Then they can go out and take over where you guys are leaving off. They’re prepared to think that way.”