The old adage that necessity is the mother of invention is playing out in real time as GoTriangle works to keep services flowing amid a severe national bus driver shortage. But Necessity would get nowhere without its children, Teamwork and Creativity, tackling the tasks at hand.

As the COVID-19 pandemic led to staffing shortages in bus operators, GoTriangle staff from every department banded together to create and carry out a new recruiting plan. The result is a new career pathway for people who want to become bus drivers to join the agency’s ranks. The training program allows anyone with a regular driver’s license to apply to become employees with full agency benefits while they work to acquire a Commercial Driver’s License, a requirement for large bus operators. During training for a CDL, these new employees begin to serve the public using smaller “light-transit” vehicles that carry passengers along four GoTriangle’s bus routes, ODX, 300, 305 and the RDU Shuttle. The effort is designed to attract new operators while lessening the strain on existing operators and supervisors who have been working overtime to keep service running.

To launch the program, Chief of Operations Pat Stephens counted on the support of GoTriangle staff from a range of departments who met remotely each week to overcome issues as they arose. They adjusted transit routes and operator assignments, and planned advertising and social media campaigns to alert the public that service would be arriving in smaller vehicles. They tackled problems that included finding vehicles and retrofitting them with new signage. They forged ahead promoting the new bus operator pathway at job fairs and planned for recruiting at a new employment center that GoTriangle in April was beginning to set up close to Durham Station, a transit hub in Durham. They came up with a campaign slogan to grab recruits’ attention and spread it far and wide: “No CDL? No problem. GoTriangle has you covered.”

“To this team, a heartfelt thanks for what has been accomplished in just a few weeks,” Stephens said to staff members during a recent meeting. We have to continue to find ways to attract new employees, especially during a time where there is a shortage of bus drivers. Our front-line operations employees – supervisors, mechanics and operators – are the most important people in delivering quality service to our customers. We must continue to support these individuals in the best way we can. Kudos to everyone on this call for their tremendous support. Hopefully, this works for the long term.”

Although the outcome of the program over the long term remains to be seen, a review of recent data showed that GoTriangle was hiring enough bus operators to replace those who retire or leave for other reasons. Even as GoTriangle’s goal is to recruit enough bus operators to restore routes cut due to the staffing shortage, that news was no small victory, as Database Analyst Matthew Frazier reported to the group.

“We are beating attrition,” he said. “We are in good shape to sustain our current service.”

On a more personal level, the new pathway has opened opportunities to people who had dreamed of being a bus operator and thought it impossible. 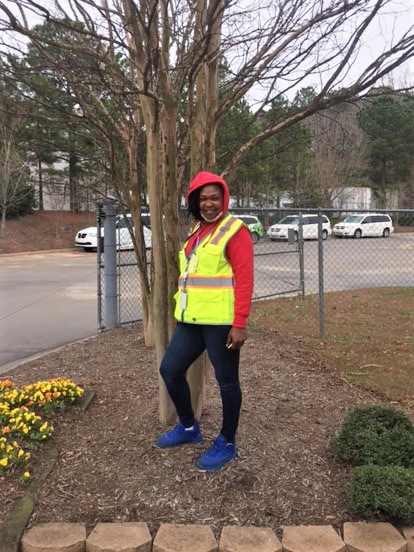 Pictured above, Evangeline Ingram, a former welder, Roanoke Chowan Community College teacher and factory worker, said she was looking for a career change when she saw the application.

“I got excited because it was a new opportunity, and I’m a person who likes a challenge,” she said when asked why she signed up to be in the first class of trainees. “Being a bus operator was something I really wanted to do but never really pursued. I guess sometimes in life, you’re doing something and as long as the pay is stable and you can get by, then you get in a comfort zone. But then, sometimes, you want to step out and do something different.”

A mother of five, she said the safety aspect of bus driving appealed to her.

“Safety is one of the things that I’ve always had to practice,” she said. “From a mother’s point of view – you know, I have five sons – with them growing up and having to drive on the highway, I’ve always had to explain safety to them, so a lot of this stuff really wasn’t new. I guess the whole thing that excited me the most was looking at buses every day going by, and now I’m going to have the opportunity to be able to drive one myself.” 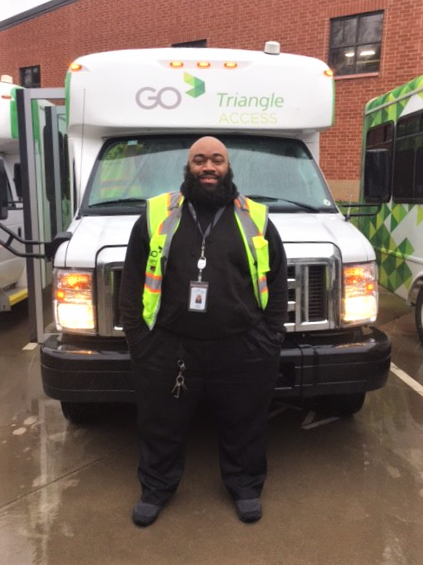 Chase Rivers, who also joined GoTriangle’s training program March 7, said he chose to switch career gears for his family and because he likes driving. A native of Philadelphia, Pennsylvania, Rivers first came to Durham to study theater at North Carolina Central University. While attending college and after graduating with a bachelor’s degree, he worked as an actor while holding other jobs at other companies, the most recent being at Amazon and the U.S. Postal Service.

“Growing up, I fell in love with driving, because I used to Uber, and that’s when I fell in love with transportation in general,” he said. “I could Uber all day. I always wanted to try being a bus operator, but I honestly was intimidated by the CDL process. I prayed about this job. I felt like I got the opportunity to do it and get my CDL, so I just look at it like a win-win.”

And the lure of driving also drew him.

“I think it’s going to be a long time that I’m going to be here just because it’s so interesting,” he said. “I’ve always wanted to do it.”