A bus operator shortage brings out the best of GoTriangle ingenuity, leading to solutions 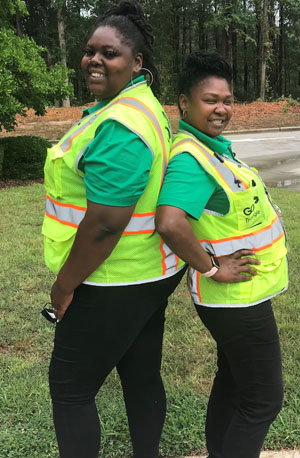 Like many transit agencies across the nation, GoTriangle faced a bus operator shortage in 2022 that took aim at its very soul – its ability to serve. How the agency responded began to yield results last fall in the form of applicants lining up to fill bus operator positions.

“We faced a threat, and what we did was we mobilized effectively,” says GoTriangle President and CEO Charles Lattuca. “We rose to the occasion as a team. We were willing to listen to opposing views, think creatively and then, change.”

At the start of 2022, the pandemic continued to mete out blows to the transit industry as its front-line workers left their jobs and hiring their replacements became difficult. The shortage of bus operators and maintenance staff began to hit GoTriangle hard. As the year wore on, the agency was forced to cut more and more service even as existing staff worked extra shifts and supervisors began driving buses in an effort to keep routes running. This January, those operators and supervisors finally began seeing relief as the numbers of bus operators applying for jobs at the agency soared and the agency worked quickly to hire as many qualified drivers as possible. As of early January, GoTriangle’s staff of bus operators had risen to 55, up from a low of 48, and Operations officials were optimistic that GoTriangle is on track to restore two temporarily suspended routes – the CRX and DRX in March 2023.

The uptick in applicants resulted from these creative efforts GoTriangle staff – from the executive level to the ground floor – took in 2022:

GoTriangle’s bus operator applications began to rise in in October 2022, when 100 people applied for those jobs, compared with 24 in September 2022 and even fewer applicants in the preceding months. In December 2022, 95 applications flooded in, and by Jan. 17, there were already 83 applications. The agency has also rehired some of its former bus operators.

GoTriangle’s train-your-own approach to filling bus operator positions began this spring with a first class of three trainees who began driving smaller GoTriangle vehicles, which allowed the agency to keep service running on routes that had fewer passengers. They worked those routes while GoTriangle helped prepare them to earn their CDL permits. In October 2022, the first two trainees – two mid-career mothers (pictured above)– had earned their CDL licenses and were fulfilling their dreams to drive 40-foot buses. By November 2022, that program had four more applicants signed up for the class, and Operations had streamlined processes with the goal of having candidates earn their CDL permit faster.

Operations assigned a dedicated bus trainer to help and, as the floodgate of applicants swept in, began scheduling a group interview for applicants rather than one-on-one interviews, yet another time-savings in the recruitment process.

In looking back, Lattuca says the road to retaining and recruiting operators began with a recognition that the agency was losing staff to competitors so its salary and compensation structure needed to change.

“We took a critical look at ourselves, we definitely studied what the other organizations were doing and decided to depart from our normal process of pay for performance and move to a time type of acceleration for pay,” he says. “We got outside our comfort zone, and that was a big deal. And I think once you do that, you can do it again.”

With input from operators and supervisors, the plan emerged, was shaped and reshaped as issues of pay compression – which happens when a new employee is paid nearly the same as or more than a longer-service employee in the same role – were addressed.

“That was not a one meeting, one-and-done process,” Lattuca says. “That was a two- or three-meeting process to come to that decision. Then taking that structure to the operators, that’s what made the whole decision work.”

GoTriangle averted the threat by reinventing its pay structure and by giving a seat at the table to its operations employees, who provided valuable insight needed for success, Lattuca says.

“We knew it would take some time to ramp up, but we knew we had a good plan,” he says. “Because of their hard work, we’re seeing some really solid results. I’m very proud of the effort that everybody put in. Let’s just keep it going.”