How guiding growth around light-rail stations can generate $1.4 billion in new tax revenue, thousands of jobs

The guidebook tries to best capture the opportunity the light rail brings to guide growth, expand access to jobs and opportunity, and generate tax revenue that allows the region to invest in other goals.

With the light-rail line will come the transformative opportunity to convert parking lots, vacant stores and unused land in Orange and Durham counties into walkable communities that provide a mix of homes, jobs and community gathering places for the Triangle’s ever-growing population and generate enough new property tax revenue to pay for other public priorities. 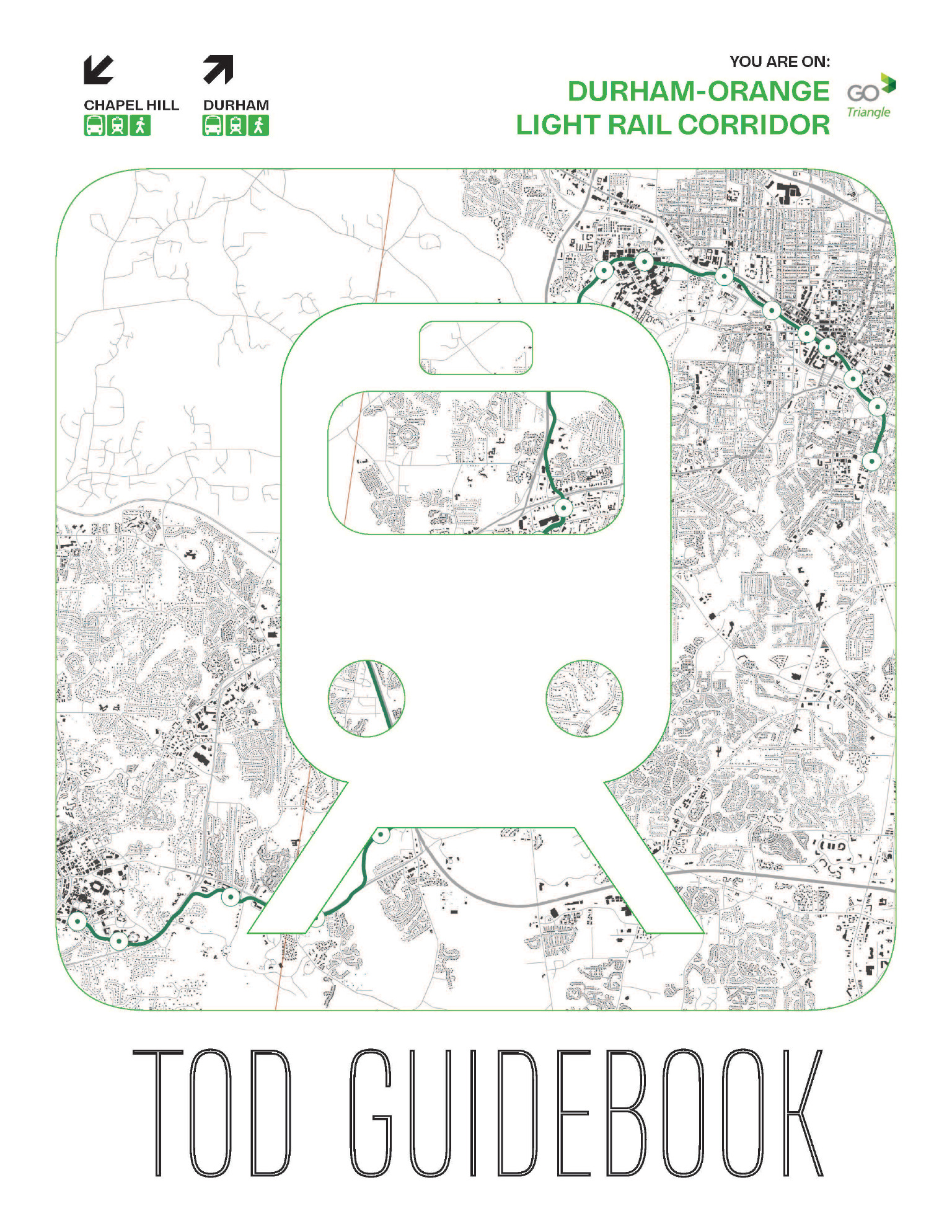 That is not an imaginary number but the result of a nearly two-year analysis that Gateway Planning conducted encompassing all of the project’s stations. For the analysis, Gateway worked with GoTriangle, Durham, Chapel Hill and the Triangle-J Council of Governments, which as a group received a $1.7 million federal grant to study transit-oriented development opportunities around the 17.7-mile light-rail project connecting Chapel Hill and Durham.

Using community input and market analyses as guides, Gateway drew up possible development outcomes for each station and compiled its work into a guidebook, available here. The guidebook tries to best capture the opportunity the light rail brings to guide growth, expand access to jobs and opportunity, and generate tax revenue that allows the region to invest in other goals. The guidebook is also intended to serve as a helpful blueprint for what actions Durham, Chapel Hill and their county partners can take to realize the benefits that transit-oriented development brings.

Without the light-rail line, many of the station areas will look largely the same 40 years from now, according to Patrick McDonough, GoTriangle’s manager of Planning and Transit-Oriented Development.

“The development concepts in the guidebook depict the transformation of aging suburban shopping centers and vacant land into new regional destinations with a mix of offices, homes, shopping, public spaces, restaurants and entertainment, all within walking distance of light rail and bus service,” McDonough says. “The concept plans also envision the incremental addition of new buildings in more urban station neighborhoods that will enhance the areas surrounding downtown Durham and the three major universities along the line.”

Most transit-oriented development seeks to vastly reduce the need for driving by using train stations to create “urban villages” that include offices, homes, retail space, parks, grocery stores and restaurants, where everyday needs are easy to reach with a short walk and where connections to bus routes and protected bike lanes make it easier for people to get around on their own two wheels.

In addition to offering projections of the effects such transit-oriented development would have on property value, tax revenues, jobs and residents along the light-rail line, the guidebook highlights affordable housing strategies, recommendations for infrastructure priorities and principles for parking and zoning ordinances for each station area.

If Durham and Chapel Hill, with support from Durham and Orange counties, decided to implement the strategies in the book, they could realistically expect $3.3 billion to $4.5 billion in extra property value and tens of thousands of new jobs around the light-rail stations over the next 40 years.

“The light-rail line is about congestion-free mobility and improved access to opportunity, but it’s about so much more,” McDonough says. “Together, Orange and Durham counties are adding 7,000 residents a year, and our investment in light rail will let us be intentional about how we grow. We can create jobs and walkable, more equitable communities near transit while also creating economic development that can provide revenue to achieve other community priorities, including affordable housing.”

Putting the guidebook’s development suggestions into place around the Patterson Place station, for example, would bring substantial amounts of new office and residential space in a pleasant urban environment similar to North Hills in Raleigh. Transit-oriented development could accommodate almost 8,500 jobs and welcome nearly 4,700 residents to Patterson Place by 2057. The increased property values could be expected to bring in roughly $100 million to $135 million in extra tax revenues as well.

The key to equitable prosperity

At Gateway station, which straddles Orange and Durham counties but is entirely within the Town of Chapel Hill, the development scenario could be expected to create more than 6,500 jobs and increase the surrounding property value by 472 percent, bringing in between $70 million and $90 million in new tax revenue by 2057. More than 2,200 of those jobs would be within Orange County, and by 2057 the county could see between $19 million and $27 million in new county property tax revenues based on the county’s current property tax rate. These figures do not include any approved or future potential development at Eastowne, which is entirely within both the Town of Chapel Hill and Orange County. 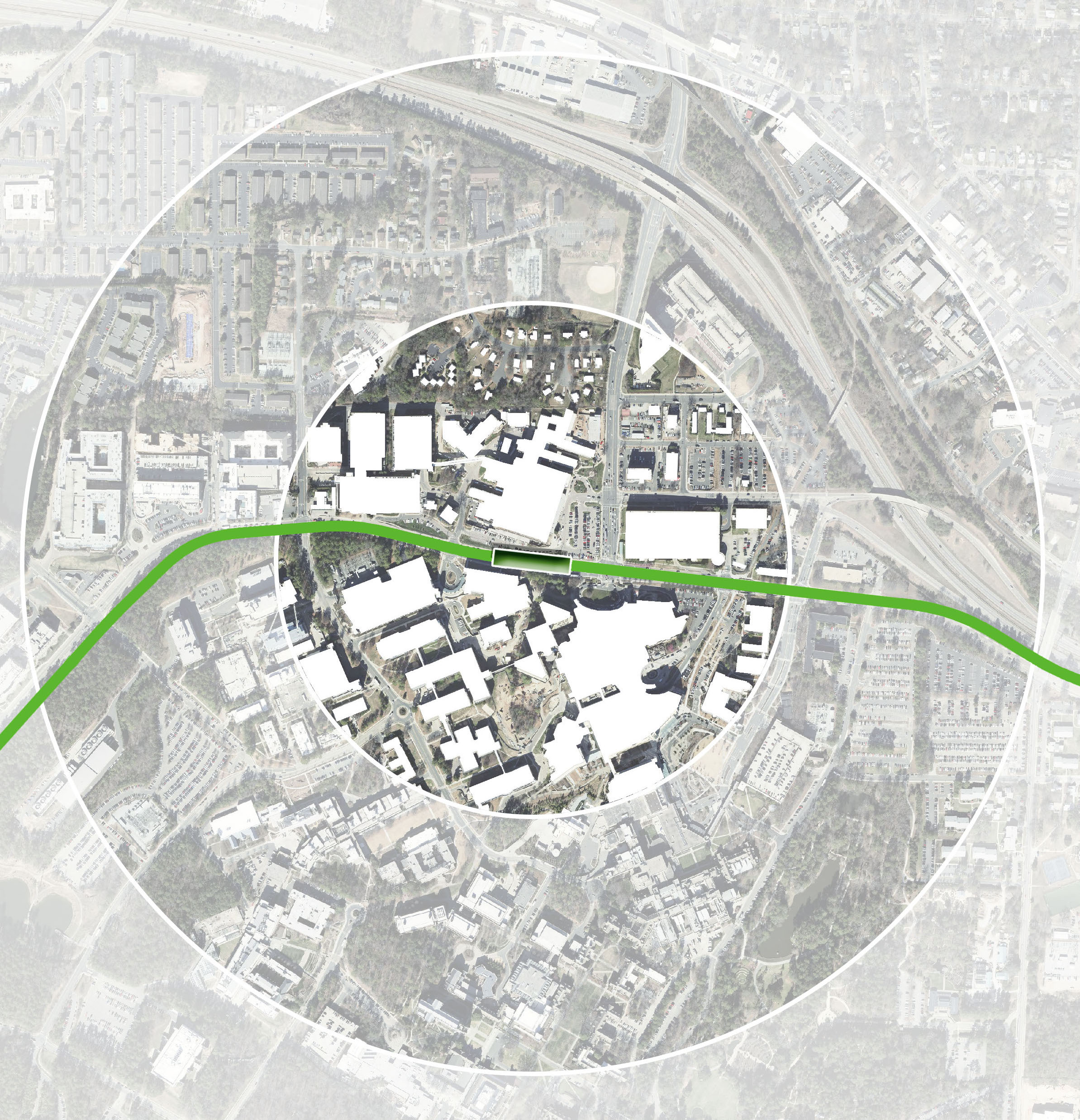 “High-capacity transit and investments that support the development that brings these dividends are the key to unlocking equitable prosperity in our region,” McDonough says. “The two largest expenses in American family budgets are housing and transportation, and public transit is truly affordable transportation. When you combine that with the light rail’s ability to avoid congestion and also create the conditions to promote affordable housing near stations, as the City of Durham and Durham County have done recently, you connect people to opportunity.”

A Harvard University study on upward mobility in fact found that commuting time is the single strongest factor in whether a family can overcome poverty. In any given county, the longer it takes to commute to a job, the worse the chances for low-income families there to move up.

With the light-rail line starting at UNC-Chapel Hill in Orange County, stopping at Duke University and continuing to NC Central University in Durham, the project also will connect a diverse mix of people to top-tier educational and medical facilities while also supporting the three university campuses. Any new housing would give university students, staff and faculty the opportunity to live within walking distance of convenient transit to get to the universities, downtown Durham and other destinations along the line.

“Coming up with the right combination of light rail and transit-oriented development will give us the walkable urban places that are in high demand and short supply,” McDonough says. “These communities will also provide higher tax revenues and lower municipal costs than their suburban counterparts. For one, just the costs of extending the water and sewer system initially and then maintaining it are so much lower with compact, walkable urban development.”

As the guidebook points out, in addition to providing transportation that never increases in travel time no matter how congested the roads get, the light-rail project also lets communities along the corridor reframe the vision for how they want to grow.

They can harness the new tax revenues, increased property values and economic growth to support equity and invest in other community priorities while also expanding access to opportunities and improving overall quality of life - no matter how many more new residents and jobs that quality of life attracts.

“With transit-oriented development around our light-rail line, we’ll be able to accommodate 44,000 new residents by 2057 with a sustainable daily lifestyle,” says Wendy Jacobs, chair of the Durham County Board of Commissioners. “We still might get that many people anyway, but it will look totally different without light rail. The light rail gives us the power to shape that growth to benefit the largest number of people.” 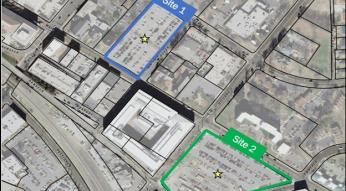 Many chances to comment on proposed light-rail project refinements