When Tamika Wilson talks, it’s easy to see how she manages to do the seemingly impossible – teach people who have never driven 40-foot vehicles how to safely navigate on public streets.

Unassuming, laid-back and friendly, Wilson explains her technique for training GoTriangle’s bus operators. “It’s all about having patience,” she says. “You’ve got to have tons and tons of patience when you’re dealing with people who have never driven a 40-foot bus before.  It’s just one step at a time.”

She admits to occasionally feeling nervous, an emotion she says she keeps under tight control.

“You can’t really be nervous and make students nervous,” she says. “So you just go with the flow of things and have them start out taking their time and eventually get them comfortable with handling the vehicle. Then, it’s smooth sailing from there, once they establish their comfort level.”

Wilson became a GoTriangle Training Specialist in January after driving buses for GoTriangle for the past almost 14 years and rising through the ranks to become a Bus Operator III, our most experienced drivers.

She says she has always enjoyed teaching as a bus operator even before she officially signed on to teach. GoTriangle’s tradition of letting trainees ride along with senior operators gave her a taste for passing along her knowledge.

“Before I joined the training team, operators would have trainees ride along with us sometimes,” she says. “It was fun to teach them the routes, helping them out, helping them along the way. So I’ve been wanting to do some time of training work for quite some time.”

To become a training instructor, takes dedication, punctuality and genuine care for co-workers, says Jimmy Price, GoTriangle’s Manager of Safety, Security, and Training. “Tamika has those qualities,” he says. “Every morning for 13 years, she arrived to work 30 minutes before report time and always provided positive feedback on trainee’s evaluation forms. She’s been a great asset to the team. The training team is fortunate to have her.”

Born in Raleigh, Wilson spent her early years of childhood in Hawaii, where her father, a military veteran, was posted. She began her early schooling in Hawaii and finished the rest of her education in Raleigh, graduating from Sanderson High School. After graduation, she drove taxis before earning a certified driver’s license through the Wake County Public School System and driving its school buses.

In 2008, she joined GoTriangle, motivated to make the switch from driving school children to transporting the public because public transit offered the opportunity to explore new places.

“I wanted to drive further,” she says. “I chose GoTriangle because it was regional and not just driving in the same city. I wanted to experience driving to different cities.”

Now that she’s made the leap into teaching, she says she’s enjoying it.

“It’s a fun ride so far,” she says, adding that she believes in learning constantly. “Transit is the kind of profession where you never stop learning,” she says. “You have to keep your mind open to learn new things because things change all the time. You have to be willing to adapt and continue to learn. So that’s one mindset over the years that I’ve had – that I have not mastered my craft. There’s always room to learn more.”

When she’s not at work, Wilson enjoys doing volunteer work through the Changin Lanez Dodge car club, where she is president of the RDU Chapter. From packing and delivering packages to homeless shelters to serving breakfast to those in need on Saturday mornings, she stays busy in her free time.

“It’s all about a community feel,” she says of the club. “Part of our criteria in recruiting people is that everybody has to put on their own community event, come up with something to do. So that kind of keeps the community spirit flowing.” 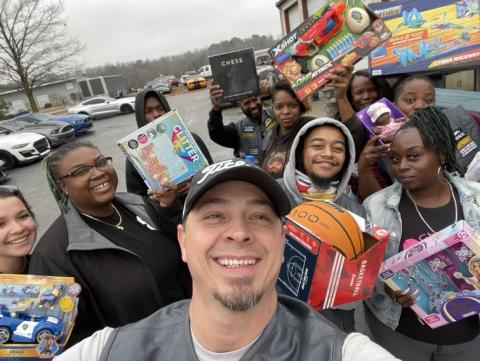 Whether GoTriangle team members are operating a bus, training operators, working on carburetors or computers or getting the word out about all of the benefits of transit, each person plays a critical role in how well we serve our community. Join Wilson at GoTriangle with a career that works for you. Learn more at gotriangle.org/careers.