Just two weeks after celebrating his 12th anniversary at GoTriangle this month, Ernest Shannon is leaving to fulfill a dream he conceived while working as a bus supervisor here. 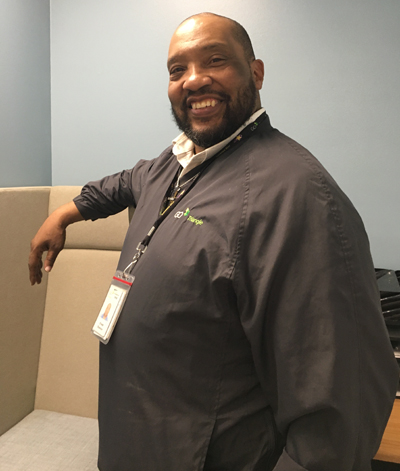 Just two weeks after celebrating his 12th anniversary at GoTriangle this month, Ernest Shannon is leaving to fulfill a dream he conceived while working as a bus supervisor here. He is laying the groundwork to open a home and treatment program to help homeless male veterans in Wake County.

“We plan to open our doors in February of 2021, provided everything goes according to schedule,” says Shannon, who is set to retire Feb. 21 from his position as lead morning supervisor for Transit Operations. “Everyone [at GoTriangle] is welcome to stop and say hello.”

It was a chance encounter with a homeless military veteran at the Regional Transit Center one night about seven years ago that inspired Shannon to research how to help. Moved with compassion for the veteran who was sleeping on the RTC campus, Shannon began to seek solutions to the plight of homeless veterans even as he worked his 5 a.m. to 2 p.m. job keeping our buses running on schedule.

Shannon tailored his doctoral thesis at Liberty University’s Rawlings School of Divinity in Lynchburg, Virginia, to understand why they were homeless. He walked the streets of Wake County on his time off to find and interview veterans, learning that many suffered from post-traumatic stress syndrome.

Since his graduation with a doctorate in ministry and pastoral counseling in May 2019, he has been working to launch the Joshua’s Conquest spiritual formation program and the Joshua’s House LLC shelter, both products of his research. Since all but two of the veterans he encountered in Wake County were male, both are designed to serve single men, but he says he doesn’t rule out serving female veterans in the future.

To gain the skills he would need to help veterans, Shannon enrolled in the Clinical Pastoral Education Program offered at UNC Rex Hospital, earning certification as a chaplain and graduating in June 2018. The interfaith professional education course required him to complete 400 hours of clinical education in a hospital setting and covered how to approach people from all walks of life and belief systems.

“It really helped me a lot to understand how to engage different cultures and different beliefs … to be understanding in dealing [with others] with love and compassion,” he says.

Having been homeless himself in the late 1980s, he says he feels a special connection with those he plans to serve.  “I’ve experienced homelessness, and also I know people sometimes need to care for you. If nobody takes the time to care for you, sometimes you’ll get lost.”

So far, he has secured 501(c)3 nonprofit status for Joshua’s House and gained approval as a government contractor so he can provide shelter and care for the homeless veterans in Wake County. He has applied to the U.S. Department of Veterans Affairs for a stipend to care for at least 50 veterans and expects to know if he got it this summer.

With some funding already on hand, he is trying to locate the owner of an abandoned hotel on Capital Boulevard in Raleigh in the hopes of buying and renovating it for the shelter. He is recruiting mental health counselors willing to volunteer their service to the veterans during the program’s first year of operation.

He says he has found help from many people, some of whom are now on Joshua’s House board of directors. Al Sarno, an associate professor in Liberty University’s Department of Community Care and Counseling, is a board member providing Shannon with guidance. Sarno, who was on Shannon’s thesis committee and already works with the Give an Hour mental health program, says he plans to provide telehealth services. He says he wanted to be involved in Shannon’s efforts to help veterans because he believes in him.

“Dr. Shannon is gifted in the way that he knows how to help these individuals, and he’s spent a lot of time with them, transporting them around,” Sarno says. “So he heard them and he heard what they needed, and then he helped to provide that. So he saw a problem and he wanted to address it, and I love being on the side of people who see problems and want to solve them.”

Shannon’s sister, Shirley Goddard, who was the chief executive officer of H.O.M.E., a nonprofit serving people with disabilities in Syracuse, N.C., and her husband, Tyrone Goddard, helped him apply to become a nonprofit.

Working out of his home garage, he is continuing to collect monetary donations and white socks for the homeless men until he secures a permanent home for the nonprofit.

As he looks ahead, he says he won’t forget the role that GoTriangle played in helping him follow this new path.

“I really do appreciate everything GoTriangle has done for me,” he says. “First I give glory to Lord Jesus Christ, but I never would have embarked on a project without running into the homeless guy. So I thank God for GoTriangle. It’s been a blessing to me and my family. I will pray for their continued success and pray God blesses them.”